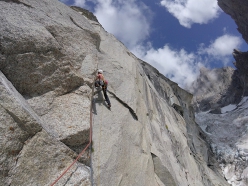 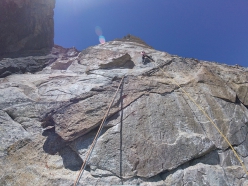 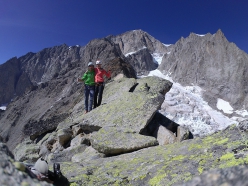 The report by Federica Mingolla who, together with Gabriele Carrara, made the first ascent of L'isola che non c’è on Aiguille Croux above Val Veny in the Mont Blanc massif.

I’ve only known Gabriele Carrara for a few months and yet it feels as if I know everything about him. I know what makes him angry and what makes him happy, and also that he’s an extraordinarily talented and energetic guy. This is the reason why our two paths met, two crazy balls that bounced from one side to another and then collided.

It was his idea to establish the new route. One rainy day I climbed up to the Monzino hut for a training session and to say hello to both him and Mauro, the hut warden. After a pleasant lunch, out of the blue, Gabriele mentioned trying a new line on the East Face of Aiguille Croux he’d noticed while climbing the West Face of Aiguille Noire.

I immediately got all excited, the lower part of the face seemed to provide a logical line up superb quality corners, while the upper section remained a mystery. We didn't' want to join Vuoto a perdere, the only other route on the face. The wall seemed to offer various different options though to escape rightwards, so the the idea started to take shape.

A few days later we began the hauling game, making our way to the base with rucksacks filled to the brim, spending the days up on the face and the evenings back down at the Monzino hut, regenerating with Mauro's lasagna. One night we decided to spend on the wall, when we managed to enter the second section of the route, the one from where a retreat back down onto the glacier is impossible.

The last pitch proved a revelation, the overhanging crack that forged its way through the final headwall bewitched both of us. It was exciting and I believe the dream of every first ascentionist to establish a pitch such as this one ground-up, without falling, reaching the top utterly exhausted. I’ve never felt anything like this before!

I really have to thank my climbing partner for this experience, because without his enthusiasm and, I hasten to add, without his (hugely strong) back none of this would have been possible.

I hope those who repeat L'isola che non c’è - Never Never Land - won’t get angry with us for the runout pro. I’d like to point out that we established the route climbing free as much as possible and stopping to add pro where it was possible to do so or where truly necessary.

I’d dreamt about making the first ascent of such a beautiful and difficult climb for a long time, and doing so with this exceptional partner was a beautiful present. Something else which makes this climb so special in my mind is its location, high above the Freney glacier, the most contorted glacier in the Mont Blanc massif. Simply spectacular!


L'isola che non c’è seen through the eyes of Gabriele Carrara
Never never land: as if to say, there is not just one objective, not just one island to stay on, but instead many different islands worth exploring, finding out about, because each of these offers something different. If you concentrate on just one you risk being engulfed by monotony, as tends to happen in today’s modern society. The time is now, not to live off memories, but to follow that second star on the right, the one which up in those starry skies shines brighter than all the rest…