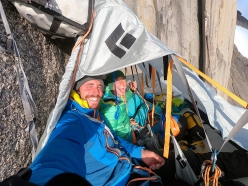 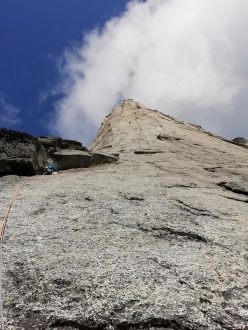 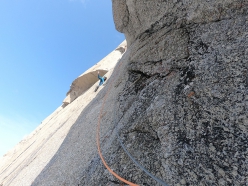 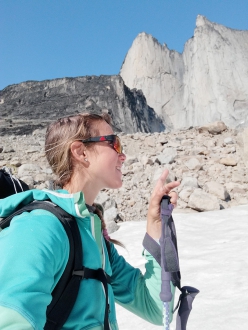 On the hitherto unclimbed south face of Middle Pillar of Nalumasortoq above the Tasermiut Fjord in Greenland Italian climbers Federica Mingolla and Edoardo Saccaro have established La Cura, a new big wall with difficulties up to 7b+/A2.

Tasermiut is a paradise, not just for rock climbing but also for the fact that here you can truly experience what it’s like to live in a real wilderness. Edoardo Saccaro and I disembarked in the fjord on the 19th of July, two days after having departed from Italy. Our journey there had been crazy! We’d passed amazing countrysides and tiny hamlets, immense open spaces and very little civilisation; at times the villages we encountered were comprised of a mere 10 houses, a few boats and, sometimes, a football field.

We adapted brilliantly to life in the fjord by establishing our base camp, fishing, drinking from the river and eating below the "Boulder" that pretty soon transformed into our kitchen, and we quickly set our sights on those that were going to be our "warm-up" routes. Our plan was to explore the area a bit and understand its potential, before establishing something new.

We got a feel for the granite first on Nalumasortoq and then Ulamertorsuaq, and in doing so we realised that it’s not quite as solid and clean as we’d imagined. Actually, it can be somewhat treacherous, above all on the slabs, while the cracks tend to be far more solid, albeit sometimes covered in thick lichen.

We discovered our route while trekking one day. I went for a recce to see a mountain dubbed Half Dome with a pleasant Swede we’d met at Base Camp, while Edo decided to stay put since his heel hurt and do some fishing for dinner, and it was then that I first set my eyes on the other side of Nalu, on its south face. You can only see the mountain’s west face from base camp, so that entire area was pretty much unexplored.

From where I was I managed to take quite a few photos of what seemed to me to be such an obvious line that zigzagged right through the center of the face before topping out a little to the right.

I was pretty sure that a route had already been climbed there before, it was such a plumb line someone had to have been there before us. Fortunately though I was wrong and after having carefully examined all the topos we possessed, plus those of the other climbers at base camp, we came to the conclusion that a new route would need establishing there, ours!

This is how La Cura came to life, a 525-meter big wall that ascends the virgin south face of Nalu, one of the peaks that tower high above the Tasermiut Fjord, along with Ula and Ketil. In the beginning we obviously had no idea what to expect, would the rock be solid or crumbly like on some of the routes we’d repeated a few days earlier? And were those black marks streaks of water, or simply darker shades? And... would the weather hold? By now it was the start of August and all the local climbers kept warning us about how quickly the weather could change, forcing us off the wall.

Fortunately though it held and after just 8 days on the wall, split into 4 attempts and countless hours spent hauling the gear up and won, we managed to complete our route, admittedly with the use of aid on some sections. On 16 August we reached the top of the south face of Nalumasortoq having completed our line, and as we stood there we could feel the air becoming more crisp: bad weather was on its way.

Our plan at this point was simple: we’d wait for the storm to pass and then return to the face and give it all we had, in order to write some numbers next to the pitches and round off our efforts.

However, when we finally returned to the mountain after having waited in base camp for almost a week for the weather to improve, we were met by some radical changes: the temperatures had dropped and were more akin to winter conditions, the sun shone on the face almost three hours less and the rock failed to warm up, despite the sun still being sky-high and there not being a cloud in sight. We despaired, we couldn't even take off our two duvet jackets and wooly socks and try and free the pitches.

After only one day attempting the line and two freezing nights on the portaledge we let our disappointment get the better of us for us, we were forced to accept defeat and - truth be told - it was right like that. After all, it was late August and we were in Greenland damn it!

La Cura, the cure, would still be there, maybe we’d return, maybe we wouldn’t. I hope though that someone will climb the route, it’s unimportant whether by myself or by someone else, what is important is that it’s climbed free because its a true work of art, a masterpiece of superbly beautiful cracks, arches and corners.

So, Big Wall climbers, give it a go! Greenland is real discovery, somewhere I’d love to return to as soon as possible. In the meantime I’ll train to complete La Cura, and will fondly remember Tasermiut and its peace and quiet.