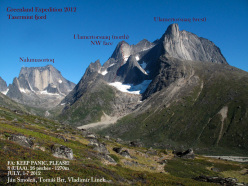 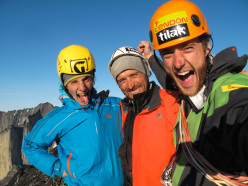 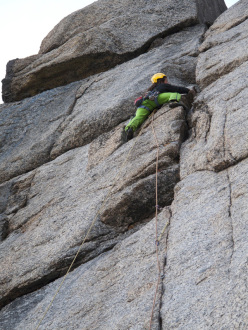 The expedition’s first goal was to establish a new route up the 1200m high South Face of Ketil. Setting off early on 23 June, they followed a series of obvious chimneys which lead them diagonally from left to right. The trio stumbled across 2 belays, most probably dating back to the 1974 Austrian route, and at the large Y-shaped feature they bore left to climb the face direct. 13 pitches were climbed in 19 hours, past a UIAA 8+ crux crack on pitch 11, before settling in for the night on a large ledge.

The next morning they continued direct and followed several pitches of the 2004 French Route. A2 aid was needed to get past a 15m wet finger crack, and after somewhat easier terrain they bivied for the second time, 21 pitches up and just below the final headwall. The summit was reached without further ado at noon the next day, and the trio then safely abseiled down the French Route. The new 1450 m line is called is Turbo, graded UIAA VIII8+, A2, and just one bolt was placed along its 25 pitches.

Four days later the trio set their sights on a line Jan Smolen had identified the previous year up the NW Face of the N summit of Ulamertorsuaq. On 1 July they climbed the first 4 pitches and then abseiled off to spend the night just below the glacier. The next day saw them jumaring up to their highpoint with food and equipment for 5 days, and then climbing another 4 difficult pitches to spend the night in their portaledge. Six pitches were forged the next day to reach the obvious large overhang, but the weather deteriorated drastically and for 3 days they remained pinned to the wall.

The sun came out on 7 July but the dripping wet rock hampered progress, with Smolen taking a long fall on pitch 17. The trio finally summited, at 20.50 and after seven days on the wall, and immediately rappelled back down to their portaledge which they reached at 2.00 am. They descended in poor weather the next day and can count themselves lucky as, safely back in BC, they then experienced a further three days of typical Patagonian weather with strong wind and heavy rain.

The new 1270 m high route is called Keep Panic, Please, is graded UIAA VIII. Only a few bolts were used to back up some belays and none were placed along the pitches. Brt, Linek and Smolen are likely to be only the second team to reach the summit.