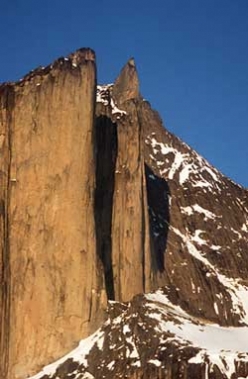 Big wall climbing Greenland style: the central and right-hand pillars of Mt. Nalumasortoq. The new route set up by the Italian/French expedition takes a line up the middle of the righthand pillar.
Photo by Mario Manica 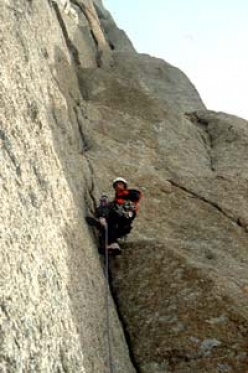 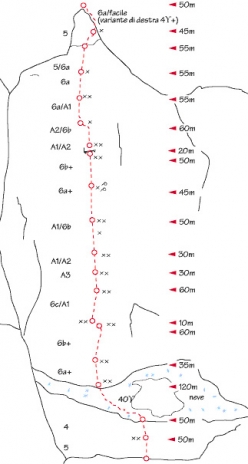 PORTFOLIO / gallery Portfolio: Mount Nalumasortoq and the climbing above Tasermiut Fjord in Greenland

Mount Nalumasortoq and the climbing above Tasermiut Fjord in Greenland

On Mount Nalumasortoq above the Tasermiut Fjord in Southern Greenland Jerome Arpin, Mario Manica and Francesco Vaudo made the first ascent of Non c'è due senza tre, a new big wall climb up the mountain's Third Pillar. Report by Antonella Cicogna.

Nalumasortoq, Third Pillar
There was just one left. The third pillar. The highest. And to put an end to it, the Greenland 2000 expedition left for the Tasermiut Fjord in the extreme south of Greenland to climb a fantastic big wall, the spectacular West Face of Mount Nalumasortoq's Third Pillar.


History
In 1995 a British expedition made the first ascent of the left-hand pillar. A year later the Greenland veteran Christian Dialphin led an expedition that successfully climbed the second pillar. The Welsh duo Nigel Shepherd and Ian Wilson attempted the third pillar that same year, but were forced to retreat after 6 pitches due to an accident.

The expedition
On May 25 2000, after two days navigating between fjords and icebergs and a brief stop in the tiny village Nanortalik, the Greenland 2000 expedition finally established Base Camp on the banks of the fjord beneath the enormous face of Mt. Ulamertorsuaq.

An hour later they set off for Camp 1, which they place three hours from Base Camp. They return at 10.00 pm and decide to make the most of the good weather: the next day Francesco and Jerome fix ropes on the West Face of the Third Pillar while Mario and Giancarlo haul provisions and equipment to Camp 1.

Three days after leaving Italy the four have already fixed 100 m of rope. Exhausted but highly motivated they continue to climb, taking turns hauling gear and climbing the route.

The team finds traces of the 1996 expedition along the first section of the route. On the crux of the sixth pitch, climbed using copperheads, they encounter the last traces of their predecessors; a set of microstoppers where the accident happened that stopped the Welsh expedition.

Events take a turn for the worse on 31 May: Giancarlo Ruffino injures his knee just a few paces from his tent and is forced, heavy heartedly after all the hard work and enthusiasm, to abandon his summit bid. A summit bid which must take place as soon as possible, as bad weather is closing in.

The next day, on 1 June at seven pm, Jerome Arpin, Mario Manica and Francesco Vaudo reach the summit in a storm. They call their route "Non c'è due senza tre", there aren't two without three.


What the team has to say
Mario Manica:
"Superb clean rock up to 6c and A3. Most pitches were freed but some were aided. After the first three pitches the line becomes really logical, so much so that it seems impossible that it had never been climbed before.

Apart from the first two slab pitches and a snowy slope, the route follows a large corner that splits the pillar in half. You can't get more logical than this.

The route follows a crack all the way up and I'm sure that it can be freed one day. We used just one bolt on nineteen pitches. At the end of the tenth pitch I saw a thread to belay off. It's uncommon to find a thread on granite, but I realised that it wasn't safe enough so I used a bolt to aid past a section and establish a belay five or six meters higher up."

The team members:
"The celebrations at Base Camp were worthy of the route: salmon (caught with the fishing rod Francesco had brought from Italy) giant mussels found in abundance, lemon and ..beer!"

"In an era of super-meditation and advertising of ascents before they've even been accomplished, Greenland 2000 had a clear idea: "don't count your chickens before they've hatched". So we departed for the bigwall in Greenland without publicising our ascent."

The espedition would like to thank the following for their support: Camp, Kong, Longoni, Mello's, Montura, Ravelli Sport, Vibram.