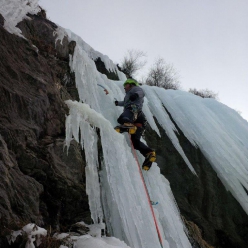 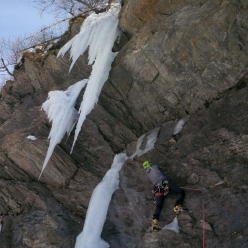 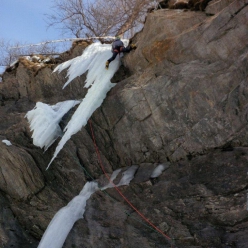 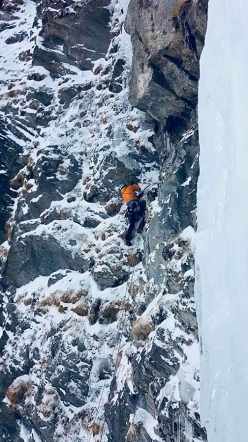 At Ollomont, a splendid valley that hides some of the most mysterious icefalls in Itay’s Aosta Valley, Ezio Marlier has established two mixed climbs: Albice with Alberto Pierotti and Rikiteppa with Paolo Celesia. Marlier reports

Two of my new ice mixed climbs are located in the fantastic Glacier amphitheater high up in the Ollomont valley. This amphitheater continues to hold surprises in store, ever since being an important breeding ground for ice climbing development in Valle d’Aosta with calibre ice climbs such as Sodoma, Gomorra, Oratorio, Pat-Gab, Gran Couloir. These drips are intrinsically linked to forerunners of Piolet traction such as Patrick Gabarrou and Alberto Cheraz, the latter being my mentor and brotherly friend with whom I shared so many ascents. Unfortunately we all "lost" Cheraz in an accident on Tour Ronde in 2009.

Glacier is also an amphitheater which, despite hosting a flurry of extremely beautiful routes, did not offer particularly difficult testpieces. Two remained unclimbed, and one of these two would probably have been a difficult nut to crack. On several occasions Alberto Cheraz and I said that we’d give it a go, unfortunately for us these words remained nothing but a promise!

Life is strange and like the valley holds surprise in store; a short time ago I noticed that the line had finally formed. What a great coup this would be for me to keep my promise! As luck would have it, a simple phone call resulted in me driving up the street at Ollomont. And as luck had it, I was with another great friend called Alberto: Alberto Pierotti. We’ve had our share of frights in the past and this turned out to another one. But we’re a tried and tested team and we managed to establish this line onsight! That’s how Albice came about.

From down below I reckoned Albice would be harder ... but that's fine. The route clims to the left of Pat & Gab. The first part, after a mixed pitch, tackles a step line of fragile and thin drips to reach the final pitch. This breaches the roof via a leftwards trending crack to reach a hanging drip. Apart from a peg on the last pitch and some slings on the tree for the abseil, we left no gear insitu!

We called the second route Rikiteppa and this is located a little further to the left, or rather, immediately to the left of the magnificent Sodoma icefall! Paolo Celesia happened to be in the right place at the right time: we’d actually intended on repeating Sodoma but it was being climbed by some Spaniards and seeing that that this alternative had come into condition... we decided to try it!

After the first 10 meters I turned to Paul and clearly stated that our ride hadn’t been particularly brilliant! What should have been a relatively tranquil day transformed into an epic 40m battle! In the end though Rikiteppa saw the light. Riki is the nickname of Paul’s son, while Teppa in the local dialect means rascal, and is often used to describe "mischievous" children…