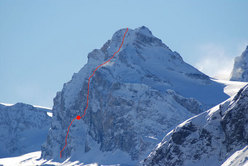 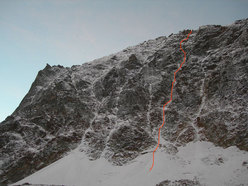 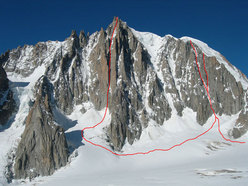 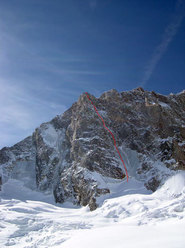 Two new routes solo by Ezio Marlier, Spirito Libero (600m IV/4/M4) on Monte Emilius and Aragon (500m IV/4+/M6/A1) on Granta Parey, plus the solo repeats of some classic climbs on Mont Blanc du Tacul and Grandes Jorasses give some food for thought about climbing "without partners".

We've often asked ourselves what motivates a mountaineer to climb a route completely alone. It's clear that no single difinitive answer exists, and Ezio Marlier's thoughts about climbing solo give nothing more than a mere indication to this drive. A drive which resulted in two new mixed lines: Spirito Libero (600m IV/4/M4) ascended on 18-19/11/2006 on Monte Emilius and Aragon (500m IV/4+/M6/A1) on the south face of Granta Parey.

Ezio Marlier writes that "particular moments" give the impetus to these solo climbs… "Situations" which, for good or bad, we try to find a name for.

SOLO CLIMBS AND PARTICULAR MOMENTSby Ezio Marlier
How many times have you found yourself in a "particular moment in life" and you've convinced yourself that there was only one way out of it all? You don't know precisely why, but you know that the time is ripe and that you've got to go... You could have planned and organised it all carefully in advance... but no... you simply pack your rucksack and go!

That's how my solo of the McIntyre-Colton on the N Face of the Grandes Jorasses came about in 2005 and the 2006 link up of the three famous Mont Blanc couloirs - Supercouloir, Gabarrou-Albinoni and Modica-Noury. Nothing extraordinary, I had climbed the routes in the past, I knew them already. These routes posed no doubts, I knew their hard sections and how to solve them.

I returned down to valley and felt strong. But then, analysing it all, I discovered I hadn't solved anything... Inside it was like before. Yes, I had climbed a lot, put in a great deal of effort, scared myself silly... but those "particular moments" were still there...

While climbing Bocconi Amari on Mont Emilius with Rossano Libera we realised that that wall had plenty of potential: a labyrinth of white lines lay waiting for their first ascents. After Bocconi Amari and what was said following the first repeat by the extraordinary and extremely strong Robert Jasper I felt satisfied, proud, but the nth "particular moment" lay in wait and knocked on my door. Rucksack filled to the brim strapped to my back and I suddenly found myself wading through deep snow in the ComboÃ© valley to reach the base on the North Face of Monte Emilius.

All that was left to do was choose which line to climb. There were different options, but which one would be more feasible? How difficult would it be? Would I manage? I knew nothing about the route whatsoever! I was completely alone and couldn't share may uncertainties and fears with anyone. "Come on, no psychologist recommended you come all the way up here... get your act together... either climb or just go home!" I reached the summit at 15.00... "Spirito Libero" came to life nine hours after setting off - 600 m. IV/4/M4.

For the nth time I felt strong and indestructible, but this feeling tends to last for the blink of an eye, to the next "particular moment", to when one falls victim to one's personal fragility. To when it hits you straight on.

Once again sweat ran down my face. Once again I was in total solitude, creating paths in the snow. An increasingly heavy rucksack accompanied me to the base on another unknown wall, while I was armed only with the idea of identifying another possible line of ascent up the wall.

Granta Parey in Val di Rhemes and her south face are almost completely unknown, unlike Rifugio Benevolo which lies at its feet and attracts hoards of tourists in the hot summer months. Only a few rock routes run through the beautiful yellow wall, and these have been repeated by famous mountaineers such as Maurizio Oviglia and Matteo Giglio. And as yet there weere no ice or mixed lins up its flanks..

"Aragon" (500m IV/4+/M6/A1) tested me for two days, fortunately this winter wasn't particularly cold and the bivy was acceptable... I hadn't reckoned with these difficulties, there was no way of knowing in advance. I had enough gear but not all the right gear; that's the difference between climbing a new route or repeating a line where you have all the necessary information.

What remains now are many questions left unanswered, who knows how many "particular moments" lie in store... The important thing is to become aware of it all and give it a meaning, to give a sense to this new experience, for good or for bad...


Valle d’Aosta - Val di RhemesGranta Parey - South FaceARAGONFirst ascent: Ezio Marlier solo 3-4/01/2007
Grade: IV -4+ - M6 - A1
Length: 500m
The route: Modern style route, demanding and highly satisfying, the 25m aid section will no doubt go free. Some pegs were left in-situ. Grandiose surroundings and solitude gauranteed
Gear: Set of friends, nuts and pegs for repeat.
Approach: From Aosta drive up Val di Rhemes to the end of the road (this may vary depending on snow conditions). Continue to Rifugio Benevolo (phone to check if it's open). Continue past the refuge to the wall on the right and reach the base of the wall (4 - 5 hours from the end of the road).
Descent: via the normal route