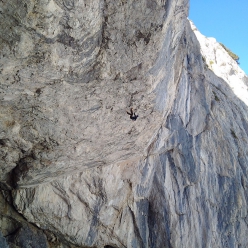 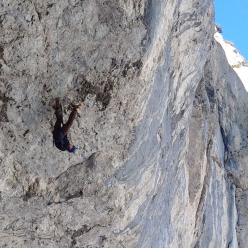 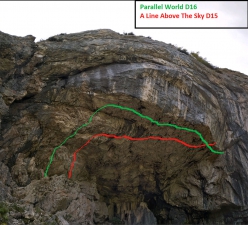 On 20 December 2018 Polish mountaineer Dariusz Sokołowski made the first free ascent of Parallel World, a dry tooling climb that crosses a 60-meter horizontal roof at crag Tomorrow's World in the Italian Dolomites. Graded D16, if the grade is confirmed, this checks in as one of the most difficult dry tooling climbs in the world.

An ultra-overhanging marathon, a practically horizontal 60-meter roof with a crux move right at the very end. This is Parallel World, a new D16 testpiece which has all the hallmarks of being one of the hardest dry-tooling climbs in the world. The route in question is located below Marmolada in the Dolomites, in the huge Tomorrow's World grotto which has become famous thanks to British alpinist Tom Ballard who has slowly but surely developed this crag into an absolute reference point with lines such as Je Ne Sais Quoi D14+ and A Line Above the Sky D15.

The bar has now been raised by Polish climber Darek Sokołowski who in 2016 pulled off one of the first repeats of A Line Above The Sky. In 2017 Sokołowski returned to establish War Without End, an unrepeated extension to Invocation for which Sokołowski suggested D15+. Parallel World now adds a further extension to War Without End and, importantly, some powerful crux moves right at the very end which is reached after an epic 50-minute battle.

It goes without saying that Sokołowski trained specifically for this testpiece at home in Poland, and that he climbed using the pure DTS* technique, ie Dry-Tooling Style. In practice, Sokołowski climbed without resorting to an endless series of Yaniro moves (also called Figure Four). If the difficulties are confirmed, Parallel World is only the third D16 in the world after Storm Giant, freed in 2018 Canada’s British Columbia by Gordon McArthur, and Oświecenie freed in January 2018 in Poland by Filip Babicz.

As we wrote in 2017, during the ’80’s and ’90’s Sokołowski was one of the main players in the Polish climbing scene, both on long mountain climbs and sport climbing. In 1996 he almost managed to repeat Action Directe, Wolfgang Güllich’s 9a masterpiece in Germany’s Frankenjura, but a serious finger injury forced him to abandon his attempts. Sokołowski is evidently highly successful at applying his legendary strength to gripping a pair of ice axes, as this recent first ascent. For the record, Sokołowski is aged 55.

23.11.2017
Angelika Rainer first female D15 with A Line Above the Sky
Yesterday at the drytooling crag Tomorrow’s World in the Dolomites Angelika Rainer repeated A Line Above the Sky. With this ascent the climber from the South Tyrol has become the first woman in the world to climb D15 and, in doing so, she has equalled the maximum difficulty ever climbed by her male counterparts.

18.01.2016
Tom Ballard: climbing towards tomorrow's world in the Dolomites
British climber Tom Ballard discusses his recent climbs, which include the first ascent of Je Ne Sais Quoi D14+ in the Dolomites, Italy.