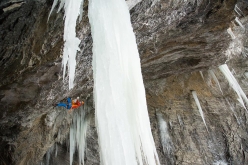 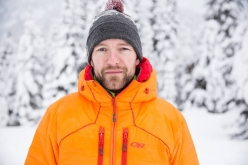 The video of Gordon McArthur climbing his route Storm Giant at Fernie, Canada. Freed last August, this is the first dry tooling climb in the world to receive the grade D16.

A few days ago we reported about Angelika Rainer who, with her repeat of A Line Above the Sky at Tomorrows World in the Dolomites, equalled the maximum difficulty ever climbed by her male counterparts. In truth there is one route that gets an even higher grade but, having been freed only last August, its difficulties still need confirming: Storm Giant at the Fernie cave in British Columbia, Canada.

This ultra-overhanging 80 meter outing was freed by Canada’s Gordon McArthur who suggested D16, a grade of hitherto unheard of difficulties that obviously awaits comfirmation. After two years of efforts McArthur freed the line in summer - on 17 August 2017 to be precise - and it will be interesting to see ifin the future the route will also be climbed in its winter garb, past the thrilling ice curtain finale.

23.11.2017
Angelika Rainer first female D15 with A Line Above the Sky
Yesterday at the drytooling crag Tomorrow’s World in the Dolomites Angelika Rainer repeated A Line Above the Sky. With this ascent the climber from the South Tyrol has become the first woman in the world to climb D15 and, in doing so, she has equalled the maximum difficulty ever climbed by her male counterparts.