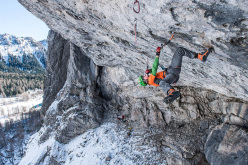 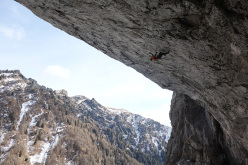 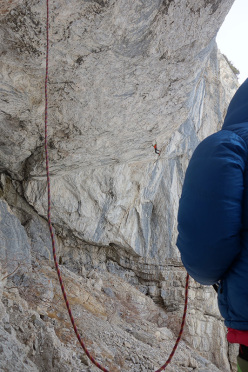 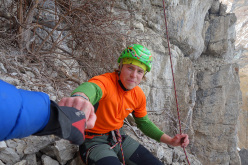 British climber Tom Ballard after the first free ascent of A Line Above the Sky D15, Tomorrow's World, Dolomites
Photo by Ryan Vachon

British climber Tom Ballard has freed A Line Above the Sky at Tomorrow's World, Dolomites. If the D15 grade is confirmed, this climb weighs in as the hardest drytooling route in the world.

D15. Four years after the famous D14+ Ironman established by Robert Jasper at Eptingen in Switzerland, a new grade has now been put forward in the total dry tooling world. A universe characterized by ice axes, crampons, a lack of ice (hence the D dry prefix, instead of M mixed) and rock which is increasingly complicated and even more overhanging… The climber who’s put his neck on the line to suggest this step forward is Tom Ballard who beneath Marmolada in the Italian Dolomites has cultivated his own particular "English garden", called Tomorow’s World, which planetmountain.com reported about extensively in mid-January. After what he himself defines a "disappointing performance" in the Ice Climbing World Cup, Ballard has now managed to channel his energies into completing his final mammoth project: A Line Above the Sky. 50 extenuating meters, all natural, that might well be the hardest dry tooling route in the world. Future ascentionists will have their say… In the meantime Tom Ballard provides the following information.

A LINE ACROSS THE SKY by Tom Ballard

Some of the British Ice Climbing Team came to stay with me between the Saas Fee and Rabenstein World Cup competitions. Of course they had to visit ‘my secret roof’. Real Steal was lapped. The strong but diminutive Scott G showed me a new method on Fear Index. Will Woodhead took his shirt off (again!), Eimir McSwiggan dug deep and fig 4’d her way up Fear Index. This turned out to be the first repeat, showing her Korean training is paying off. I fought my way across 40 meters of roof to claim the first ascent of French Connection D15-. Still one more project to go… Croatian Damir Behlic had been there the day before and made the first repeat of Edge of Tomorrow, confirming the grade. So the ‘roof’ now had an international reputation!

Rabenstein was disappointing for me, my performance that is, not the competition which was cool. It was my last chance to salvage something from my three other dismal performances. The routes at Rabenstein were steeper and had a lot more ice, I should have excelled here as I am theoretically a ‘real’ climber. In the previous comps I’d wasted so much time trying to figure out how to use each hold that I always ran out of the allotted time. Except in Korea where it looked, and felt, as if I had never used a pair of ice axes before. Inevitably I fell off. At Rabenstein I wasn’t keen to stand in the rain and watch the finals, however inspiring the athletes’ performances were, well done Janez Svoljšak!

The hero of Ouray Ryan Vachon had heard about my ‘amazing cave’ and was staying in the same hotel as the British Team, so he and fellow Colorado climbers Chris Snobeck and Susan Owens gave me a lift ‘home’. Eimir had narrowly missed out on the women’s final, finishing an impressive 9th, she was excited to return to the cave. The first words the Americans said when the saw the ‘roof’ was "Holy Shit"!

After warming up on the D9 I went for the last project… halfway across the crux I came off…I wasn’t tired, but I had cold hands. The rope was pulled through and I immediately set off again… cut loose after cut loose, clip after clip, the end seemed to never get closer. And then I couldn’t remember where one of the holds was, I had dropped the crayon whilst working it and so the last holds are not ‘marked’. My hands were slipping, fingers unravelling, somehow I kept going and clipped the belay! Wow!
All the routes have been climbed in pure DTS style*, no fig 4’s, and are graded as such. This is the hardest bit of climbing I have ever done. There are some very big ‘shouldery’ moves, and then you must just keep going for close to 50 metres!

Keen young Canadian Noah Beek is here now, crushing things! He has already made the second repeat of Edge of Tomorrow and is working on something harder…
Is the grade of D15 justified? I think so but somebody will have to repeat it. Come and have a go if you think you can climb hard enough!