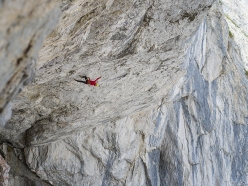 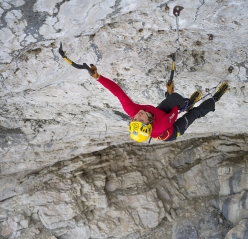 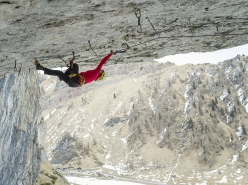 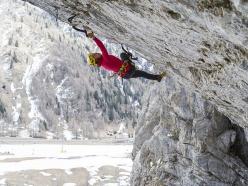 Angelika Rainer first female D15 with A Line Above the Sky

Yesterday at the drytooling crag Tomorrow’s World in the Dolomites Angelika Rainer repeated A Line Above the Sky. With this ascent the climber from the South Tyrol has become the first woman in the world to climb D15 and, in doing so, she has equalled the maximum difficulty ever climbed by her male counterparts.

An important ascent took place yesterday at the huge cave nicknamed Tomorrow's World above Malga Ciapela close to Mt Marmolada in the Italian Dolomites, where Angelika Rainer pulled off a stunning repeat of A Line Above the Sky. This huge outing was freed by England’s Tom Ballard in 2016 and, with its D15 grade, is considered the most difficult drytooling route to the world. After the first ascent the climb was repeated by dry tooling specialists such as Gaetan Raymond, Dariusz Sokołowski and Jeff Mercier, and Rainer’s redpoint is remarkable not merely because it’s the first female ascent of a D15, but because in doing so the ice climbing world champion has managed to reach the confirmed apex of current dry tooling difficulties, placing her on a par with her male colleagues.

A Line Above the Sky in the Dolomites

When I first went to the drytooling crag Tomorrows World, located at Malga Ciapela in the Dolomites, I was simply blown away. From the road the cave is impressive, but when you actually walk up to it, and stand below the roof, then you realise how huge it really is and how much the vault overhangs. As you look outwards you make out rows of quickdraws, dangling in the void. And the most challenging climb of all, A Line Above The Sky, has 27 draws that lead across the overhanging or completely horizontal terrain.

My early attempts were thwarted by long moves; 5 long reaches in particular, 2 on sidepulls, 3 on underclings, caused me grief and I barely managed to do the individual moves. Distributed evenly across the 40-meter roof and with little chance of resting, my first impression was that the route was certainly extreme, but not impossible. So I decided to work my way slowly towards this goal, first by sending the nearby easier routes, as they’re all variation with a different start or finish. I managed to place the penultimate piece of this puzzle three weeks ago with my repeat of Je Ne Sais Quoi, D14+. I knew now that the only one missing was A Line Above the Sky.

I decided to try the route as it had been done originally, without a hold that was created only after Tom Ballard’s first ascent and Gaetan Raymond’s first repeat. This hold makes one of the cruxes a lot easier, and having had the honour of trying the route with Tom and Gaetan, and helping Gaetan on his ascent, I wanted to repeat the original version. Unfortunately in dry tooling these things happen, holds improve due to the crampons or ice axes and routes consequently become easier. Sometimes the opposite happens and holds break or become smaller, making the routes harder as time passes. One needs to bear this in mind when drytooling.

While analysing the weather forecast I realised that snow was predicted for this weekend, and the temperatures up at Fedaia will hit zero. The cave faces north so it never receives the sun, and it’s also exposed to the winds. Climbing a 40 meter route at my limit, with cold fingers, is practically impossible, so I decided to try it yesterday, with temperatures hovering around 3° C; I succeeded and achieved my goal!

I would like to thank Tom Ballard in particular for having provided me with this beautiful project so close to home and my partner Marco for having belayed me, for cheering me on and offering advice on how to train specifically for this route.