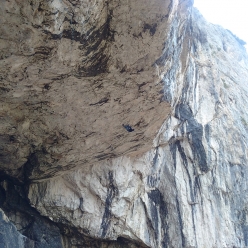 Dolomites drytooling: Dariusz Sokołowski traces A Line Above The Sky

In December 2016 Poland’s Dariusz Sokołowski repeated A Line Above The Sky, one of the most difficult drytooling climbs in the world, freed at Tomorrow's World in the Dolomites by Britain’s Tom Ballard in 2016.

In mid-December 2016 Polish climber Dariusz Sokołowski repeated A Line Above The Sky, considered one of the most difficult - info the most difficult - drytooling climbs in the world. Situated beneath the massive Marmolada (Dolomites), more precisely in the hugely overhanging grotto called Tomorrow's World, this 50+ meter route was freed at the end of January 2016 by England’s Tom Ballard, and repeated by Frenchman Gaetan Raymond a month later.

In preparation for this ascent, Sokołowski repeated the nearby climbs Je Ne Sais Quoi D14+ and Oblivion D14. For all three ascents the Pole, just like the first ascentionist, climbed DTS, i.e. Dry-Tooling Style. In practice, this involves climbing without making any Figure of fours, or Yaniro.

Nicknamed "Łysy", which means bald in Polish, during the ’80’s and ’90’s Sokołowski was one of the main players in the Polish climbing scene, both on long mountain climbs and sport climbing. In 1996 he almost manager to repeat Action Directe, the 9a masterpiece of Wolfgang Güllich in Germany’s Frankenjura, but unfortunately he seriously injured his fingers during his attempts. Sokołowski is evidently highly successful at applying legendary his legendary strength to gripping a pair of ice axes, as his recent ascent A Line Above The Sky demonstrates. Aged 53.

RELATED NEWS
05/20/2016 - Tom Ballard claims world's first D15 dry tooling climb in the Dolomites
British climber Tom Ballard has freed A Line Above the Sky at Tomorrow's World, Dolomites. If the D15 grade is confirmed, this climb weighs in as the hardest drytooling route in the world.