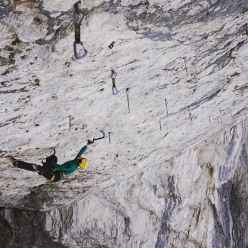 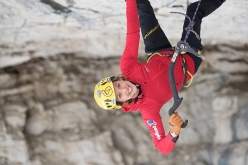 Italian climber Angelika Rainer and French alpinist Jeff Mercier have repeated 'Je Ne Sais Quoi' and 'Line above the Sky' at the crag Tomorrow's World in Dolomites; these dry tooling test pieces was freed in 2016 by Tom Ballard.

Short but sweet news from the Italian Dolomites where local climber Angelika Rainer and visiting French alpinist Jeff Mercier have both started the winter season in style with fast repeats of Je Ne Sais Quoi D14+ and Line above the Sky D15. Located at the crag Tomorrow's World below Marmolada, these total dry tooling testpieces were freed by England’s Tom Ballard in 2016 and are considered to be some of the most difficult drytooling climbs in the world.

Rainer admits she was surprised by yesterday's success, but it’s worth remembering that this ascent follows another excellent repeat in the same hugely overhanging cave, namely the D15- French Connection last February.

In the past the three-times Ice Climbing World Champion has repeated other notable climbs, such as the mixed testpiece The Mustang M14- at Vail in Colorado in 2016, the WI10+ Clash of the Titans at Helmcken Falls in Canada in 2014 and, in 2013, the mixed outing Steel Koan M13+ at the Cineplex Cave in Canada.

08.01.2016
Angelika Rainer climbs The Mustang at Vail in Colorado
After having flashed 'Reverse Stratofortress' M12+, Angelika Rainer has repeated The Mustang at the Fang Amphitheater, Vail, USA. With her first grade M14- mixed climb the Italian climber proves she’s on formidable form for her outdoor projects and the next stages of the Ice Climbing World Cup.