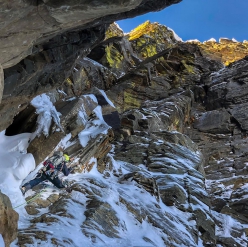 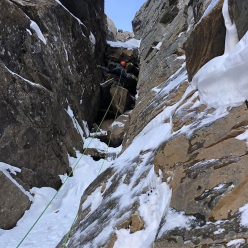 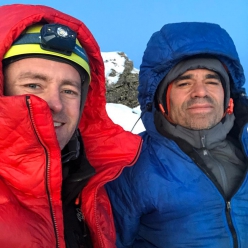 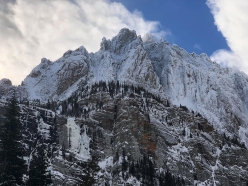 The Central Couloir of A Peak in the Cabinet Mountains, Montana, USA, has been climbed by Jess Roskelley and Scott Coldiron.

American alpinists Jess Roskelley and Scott Coldiron have spent four cold days making the first ascent of what has been described as a “dream line”, namely the The Central Couloir up the North Face of A Peak in the Cabinet Mountains, Montana, USA.

Roskelley and Coldiron made the 3.5 hour hike to the lake below the mountain where they spent the night, then made the approach and scrambled for 3 hours before roping up and spending two full days on the route. 800 meters of hard climbing, past difficulties up to M7 AI5, led them to the summit. They descended down the back side of the mountain, requiring one more bivouac and a further 11 hours to return to the car.

Coldiron had made an impressive attempt with Matt Cornell a few days earlier but had turned about due to worse conditions.

Talking to planetmountain.com, Roskelley stated that "The Cabinet Mountains are some of the wildest mountains anywhere. Everything is big and remote. I almost don’t like going in there, I knew it would be awful. Scott Coldiron and about 3 other guys are responsible for putting up the routes in there. There is a reason for that: it’s too damn far in the backcountry for most people to go in winter. Just the 6 miles to the lake where the climbing starts is an big job. The climbing there though is great, even world class. I love that place but mostly when I get out safely"

Scott Coldiron has been trying to get the central couloir of the north face of A peak for a long time. It’s located in the Cabinet mountains in Montana. From the lake to the summit it’s 1200 meters with 800 meters of hard climbing. Scott and @matt_cornell25 almost got it the other day with much worse conditions which is impressive. Yesterday and today we got a good window and made it work. 800M M7 AI5 @alpine_tribe #dmmwales #neverstopexploring #lowa #cold #thenorthface @lowaboots @thenorthface @thenorthface_climb @dmm_wales