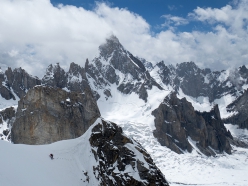 Kondus valley: Kurt Ross soloing on a smaller tower during acclimatization. Changi 2 tower in the background.
Photo by Nelson Neirinck 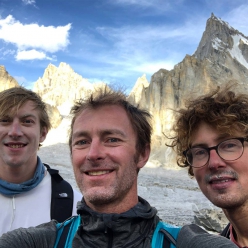 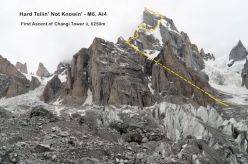 American alpinists Jess Roskelley and Kurt Ross and Nelson Neirinck from Belgium are currently battling the sweltering heat in Islamabad after having enjoyed almost a month of perfect weather in Pakistan’s Karakoram mountains where they managed to ascend two hitherto unclimbed 6000m peaks in the previously untouched northeast Kondus valley close to the Indian border.

Acting on a tipoff from US climber Steve Swenson, the trio reached the Karakoram cirque in mid-July and established base camp at circa 4400 meters after a mere two-day approach. They acclimatised further by climbing a nearby rock tower that peaked a circa 5800m and then set their sights on Chhota Bhai, a 6321m mountain which is dwarfed by nearby K6 - hence the name which means little brother. A day was spent reaching the base of the headwall, where they pitched a tent to escape the heat. They set off early in the morning on 4 August and after climbing for most of the day decided to wait just below the summit for temperatures to cool down once again in order to avoid the afternoon rockfall. They summited at 18:30 circa and then began the descent, returning to the base of the mountain after a 3 day round-trip. Naps & Noms weighs in at AI4.

A short rest happily coincided with the only poor weather during the entire trip, after which they focussed on what locals call Changi Tower 2, a 6250m peak not to be confused with the nearby, taller Changi Tower. On 9 August Neirinck, Roskelley and Ross navigated across the glacier to establish ABC and bivied once more during the ascent. Once again they waited for temperatures to cool prior to crossing a rockfall zone, and the summit was reached successfully on 11 August. The descent was hampered by rockfall chopping both ropes, but the trio made it down safely the next day. The new route has been called their Hard tellin’ not knowin’ (M6, A14).

On the summit of what the locals call Changi 2 (6250M), we discovered a diving board for anyone who could make good use of a wing suit. One of the most unique summits I’ve been on. #jamesbaroud #ok4wd #dmmwales #neverstopexploring #pakistan #thenorthface #lowaboots @thenorthface_climb @dmm_wales @lowa.outdoor