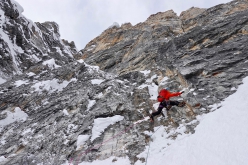 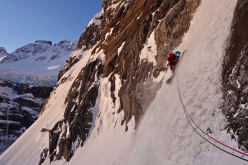 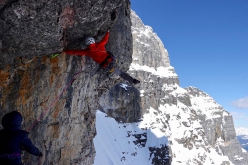 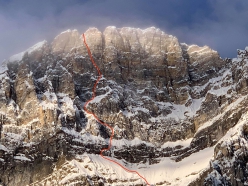 From 2 - 3 April 2019 Brette Harrington, Luka Lindič and Ines Papert made the first ascent of The Sound of Silence (1100m, M8 WI5) up Mount Fay in the Alberta Rockies, Canada. This is the first route to climb the entire East Face.

At the start of April an international team comprised of Brette Harrington, Luka Lindič and Ines Papert joined forces to ascend a new route up the East Face of Mount Fay in Canada’s Alberta Rockies.

Lindič had attempted the face in 2016 with the his good friend, the late Marc-Andre Leclerc, but the duo had been forced to abandon their attempt due to prohibitive conditions. Ever since then the mountain remained firmly engrained in his mind, especially after Leclerc’s premature death.

Lindič and Papert travelled from Germany to Canada at the end of March and met up with Brette Harrington, Leclerc’s former partner, almost completely spontaneously. They began climbing in the early hours of the morning on 2 April, past vertical ice pillars and steep snow, intially following the original route established in March 1984 by Barry Blanchard, David Cheesmond and Carl Tobin. Where these had traversed right 35 years ago below the steep headwall due to lack of provisions and dangerous conditions, Harrington, Lindič and Papert continued directly upwards into uncharted, loose terrain.

Lindič explained: "We climbed some very wild, steep pitches and spent a night somewhere around 250m below the summit. On the second day we needed to fight quite hard to get up sections of the very loose and very steep rock wall. The snow storm that hit us midday only added to the experience. When I climbed the very last overhang to sneak around the cornice I started screaming like hell from pure happiness. Soon, the frozen girls joined me and we screamed from happiness together. I could feel that Marc Andre was with us up there and I couldn’t imagine doing this climb in a better way."

The Sound of Silence, named in memory of Marc-André Leclerc, is the first route to ascend the East Face of Mount Fay in its entirety. 1100m high, weighs in at M8 WI5 and was climbed in extremely fast alpine-style with just one bivy.