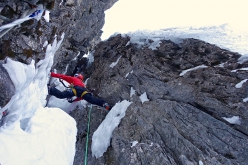 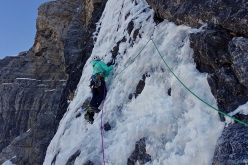 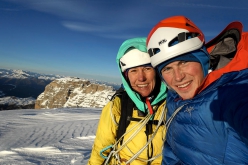 Ines Papert and Luka Lindič on the summit of Cima Tosa (Brenta Dolomites) on 01/01/2019 after having made the first repeat of Selvaggia sorte
Photo by Ines Papert, Luka Lindič 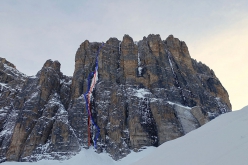 Brenta Dolomites winter climbing: on 01/01/2018 alpinists Ines Papert and Luka Lindič have made the first repeat of Selvaggia sorte up the west face of Cima Tosa 3133m. The route was first completed by Tomas Franchini and Alessandro Lucchi in 2013.

Germany’s Ines Papert and Slovenia’s Luka Lindič have made what is likely to the first repeat of Selvaggia sorte, the 600m outing up the west face of Cima Tosa in the Brenta Dolomites. The line was established on 12 March 2013 by Tomas Franchini and Alessandro Lucchi after Franchini had forged the first 7 pitches on his own a few days earlier. Due to the onset of darkness and fog the two opted to retreat after the difficulties, and recently the line was attempted by Gianni Canale, Roberto Maroschini, Aldo Mazzotti and Demis Lorenzi who turned back after pitch 7.

This was the first visit to the Brenta Dolomites for both Papert and Lindič and their original plan had been to repeat Filo d’Ambiez, the route established on 14 December 2018 by Canale, Mazzotti and Lorenzi. Papert and Lindič pitched their tent late on 30 December at the foot of Cima Crozzon and, after discovering the next morning that Filo d’Ambiez was no longer in condition, decided to explore the valley further and choose and objective for the first day of the new year.

"We were intrigued by the spectacular valley surrounded with peaks and walls. We could see the thin ice lines everywhere but were in doubt which one would offer the best conditions."

recounts Papert, adding "And there it was, the most obvious line leading almost to the summit of the Cima Tosa with 3133 m, the second highest peak of the Brenta. Ice glued like plastic to the dolomite rock. All we knew was that we were climbing the west face of the Cima Tosa, but abandoned gear in the route soon led us to believe it was an existing route."

Papert explains "We took the direct line up ice that formed this year and the signs of other climbers disappeared. Thin, difficult to protect ice, was just good enough to enable us to always follow a direct line up the steep face. Each pitch held a surprise and offered more challenging climbing than expected. Soon the steep wall turned into a gully that we followed to the end. A few hundred meters higher we reached the summit of Cima Tosa at 16 o'clock and had just enough light to find the descent (3 rappells) on ​​the south side. At about 7.30 pm we reached our little tent, packed up quickly and ran back down to the valley for a pizza."

The ascent is a repeat of Selvaggia sorte with some important new variations, and it came about after further repeats across the Dolomites. On 19/12/2018 the duo climbed Jumbo jet via its direct start, rarely repeated as this seldomly forms, while on 20/12/2018 they climbed Zauberflöte and added a variation on pitch 3 they called Papageno.