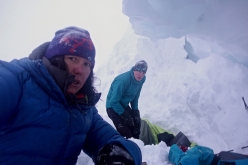 Shishapangma Expedition 2018: Ines Papert and Luka Lindi shocked, saving what they could to escape from the mountain.
Photo by archive Luka Lindič, Ines Papert 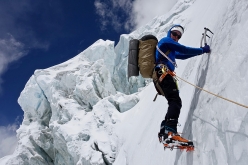 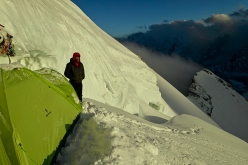 Shishapangma Expedition 2018: Ines Papert at the second bivy on Nyanang Ri on the evening before the avalanche.
Photo by archive Luka Lindič, Ines Papert

Shishapangma Expedition 2018: most of the descent from Nyanang Ri was done in poor visibility and snowfall.
Photo by archive Luka Lindič, Ines Papert

During the acclimatisation phase prior to Shishapangma in Tibet Slovenia’s Luka Lindič and the Germany’s Ines Papert miraculously escaped an avalanche on Nyanang Ri.

Things don’t always work out as planned. Actually, failure is more common than success when attempting something difficult in the mountains, especially up at high altitudes. The important thing though is to return home safe and sound. All the rest is secondary.

This, no doubt, is what Slovenia’s Luka Lindic and Germany’s Ines Papert thought recently. As reported earlier this year the climbing and life partners had planned to climb Shishapangma, the 8027 m giant in Tibet. Ideally they wanted to climb the mountain’s South Face, their ambitious project even included forging a new line alpine style. For Papert it would have been her first 8000er after her smooth new route on Likhu Chuli I (6719m) in Nepal in 2013. For Lindič the expedition represented a return to the highest altitudes after Broad Peak (8051m) and the North summit of Gasherbrum IV (7900m) climbed in just two weeks together with Ales Cesen in 2016.

This was the plan, but the expedition realty proved harsh and insidious. Starting from the acclimatization phase, an attempt to establish a new route up Nyanang Ri. After a first bivy and then pitching their tent close to the Bergschrund, in the early hours of the morning they woke up to a huge roar and the earth trembling beneath their feet. They jumped out of their tent, just in time to leap to safety as they watched their tent being swallowed up by an avalanche. Shocked, they immediately realised that the gear they’d need to get off the mountain was buried under 3 meters of snow and after digging nervously for two hours, constantly worried about further avalanches from above, they recovered their gear and abseiled down to base camp.

Some days later, having recovered from the shock of Nyanang Ri, they attempted another acclimatisation run on nearby Pungpa Ri (7450m), but because of the cold, the strong winds and the fact that the Papert didn’t feel 100% well they bailed. From that day on the weather never improved and they returned home a week earlier than planned.

Reflecting after the expedition, Lindic explained "Things were not working out for us on this trip and in situations like this it would be easy to find an excuse to lower our expectations of doing everything in pure alpine style. It was Ines’ first time trying to climb an 8000m peak, and it definitely didn’t go as we would have wished. We failed to climb anything. We went through very tough moments both as rope partners and as a couple, but we always fought through it together and most importantly, made it back home healthy. We feel good about accepting our failure on this trip and in sharing it the same way we would share our success. This isn’t always an easy feat."

29.11.2013
Likhu Chuli I, first ascent by Ines Papert in Nepal
On 13 November 2013 German alpinist Ines Papert made the first ascent of the hitherto unclimbed Likhu Chuli I (6719m) in Nepal, also referred to as Pig Pherago Shar. Her climbing partner Thomas Senf abandoned his attempt circa 140m below the summit due to frostbite.