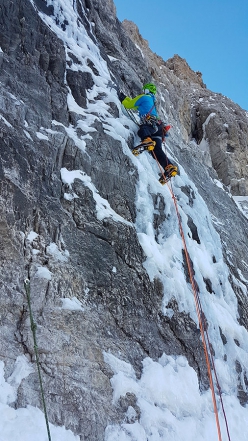 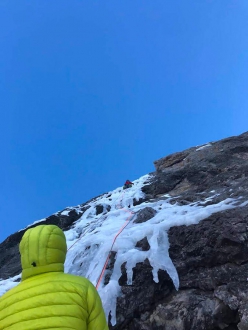 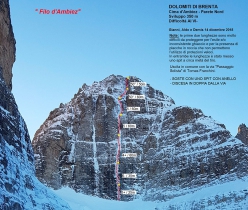 On 14 December 2018 Gianni Canale, Demis Lorenzi and Aldo Mazzotti made the first ascent of Filo d’Ambiez ( AI, VI-, 350m), a direct line up the NW Face of Cima d’Ambiez in the Brenta Dolomites.

Italian mountaineers Gianni Canale, Demis Lorenzi and Aldo Mazzotti hit it big on Friday 14 December when they forged a beautiful new direttissima up the NW Face of Cima d’Ambiez in the heart of the Brenta Dolomites.

The trio set off from their car at 2:30am and made their way up through Val Brenta, unsure of which line to pick but certain that sooner or later they would strike gold. After having walked past Via Valeria, the climb Canale and Mazzotti had established in 2013 up the west face of Crozzon di Brenta, they reached the foot of Cima d’Ambiez and, much to their amazement, noticed that a huge line of ice had formed from the summit all the way to the base of the mountain.

Although they didn’t know whether the route already been climbed, they decided to ascend it nevertheless; such a plum line simply couldn’t be ignored. Seven pitches, in part extremely difficult to protect, led slowly to the summit, reached in the dark with just one head torch between them. All belays were backed up with a single bolt, while a bolt was placed mid-height on pitches 1 and 2 to render the runout less dangerous. The climbers abseiled down their Filo d'Ambiez and made it back to Pinzolo at 23:00, just in time for a well-earned pizza.

A few days after their ascent, Canale, Lorenzi and Mazzotti found out that their direct line straightened out Passaggio Solista, a line established solo by Tomas Franchini that weaved its way through the patches of ice in May 2013.

10.01.2013
Valeria, important new ice climb in the Brenta Dolomites
On 6-7 January 2013 Gianni Canale and Aldo Mazzotti made the first ascent of Via Valeria (270m, VI ice, M4+, VI+ rock) up the west face of Crozzon di Brenta, Dolomites. The route has been dedicated to Valeria Brunelli.