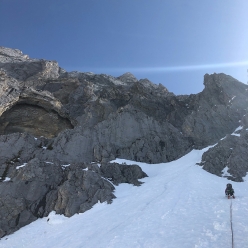 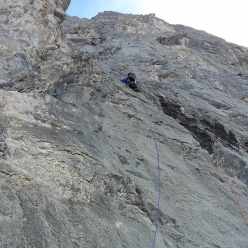 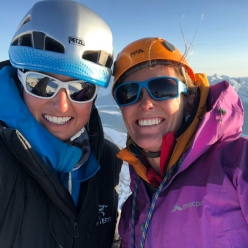 Brette Harrington and Rose Pearson on the summit of Mount Blane, Canada after having made the first ascent of Life Compass
Photo by archive Harrington / Pearson 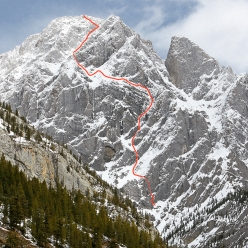 Alpinists Brette Harrington and Rose Pearson have made the first ascent of Life Compass (IV 5.10a M4+ 80°, TD+, 980m of climbing), a big new alpine outing up the West Face of Mount Blane in Canada.

America’s Brette Harrington and New Zealand’s Rose Pearson have climbed a big new route up the West Face of Mount Blane, a "large and complex" peak in Canada’s Rocky Mountains. The duo, who somewhat remarkably climbed only their first route together just two days earlier when they repeated the Slawinski / Takeda on Mount Athabasca, spent about 10 hours climbing what has been described as "a stunning line". This weaves its way up the right hand side of the mountain Harrington had noted a few days earlier while driving along the Spray Lakes road.

Harrington and Pearson left Canmore at 4:30 am, started the approach at around 6:00 am and reached the base of the technical climbing at around 10:00 am. According to Harrington the "climbing included lots of steep snow and precarious rock and mixed." Nevertheless they managed to simul climb much of the route, and "climbed the technical pitches efficiently" to reach the summit at around 8:30pm.

Harrington told planetmountain.com that the ensuing descent was "complex" and they spent the next few hours navigating the knife edge ridge with hefty cornices. "The nightly winds were strong" Harrington wrote on Instagram "so it took us quite a while to get off the ridge eventually making three long 70 meter rappels into a nearby gully where we then progressed into hours of front pointing and down climbing on spring snow." They eventually reached the car at 4 am.

It is believed that the first 2/3 of the climb are an entirely new route and only the upper corner, i.e. the last third, may run close to an existing summer route established by Rafael Slawinski; where this climbs rock, their mixed line ascends snow to breache overall difficulties up to IV 5.10a M4+ 80°, TD+. No fixed protection was left on the 980 m climb and on rappel they left a sling, 2 nuts and an angle.

The new route has been called Life Compass. Harrington explained "We have named it Life Compass for a number of reasons. Primarily because my life has taken such a sudden 180 degree turn since the loss of Marc in March (Marc-André Leclerc, who perished in Alaska with Ryan Johnson, Ed) and alpine climbing has been my guide. I dedicate this climb to my climbing mentor, partner and love Marc-Andre who would probably solo it the following day ;) if he was here."