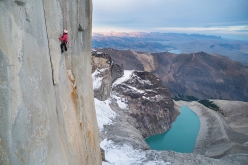 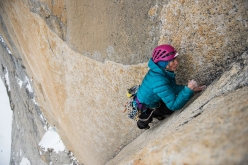 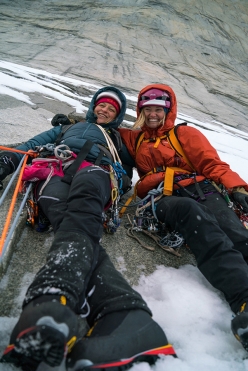 Mayan Smith-Gobat and Brette Harrington below the Cenral Tower of Paine which hosts the climb 'Riders on the Storm', Torres del Paine, Patagonia
Photo by Drew Smith 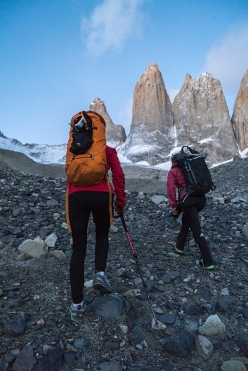 PORTFOLIO / gallery Portfolio: Torres del Paine in Patagonia: Riders on the Storm too stormy for Mayan Smith-Gobat and Brette Harrington

Torres del Paine in Patagonia: Riders on the Storm too stormy for Mayan Smith-Gobat and Brette Harrington

Mayan Smith-Gobat and Brette Harrington have abandoned their attempt at make the first free ascent of Riders on the Storm, the famous big wall up the Central Paine Tower in Patagonia, due to terrible weather.

Stalemate. Mayan Smith-Gobat’s second attempt at freeing Riders on the Storm, the famous 1300m rock climb up the East Face of the Central Tower of the Torres del Paine in Patagonia ground to a halt at the end of January due to typical Patagonian weather conditions. Established during six stormy weeks at the end of 1990 and the start of 1991 by the Germans Kurt Albert, Bernd Arnold, Norbert Bätz, Peter Dittrich and Wolfgang Güllich, this route is considered a true crown jewel in Patagonia’s end of the world climbing repertoire. At the time the Germans breached difficulties up to 7c free and A3 aid and, seeing the calibre of the team and the beauty of the line, the first free ascent soon became a plum objective throughout the big wall climbing world.

In truth the route has received little attention in its nigh 30 year history, in part due to the infamous Patagonian weather, and in part due to the fact that in the last decade the Fitz Roy and Cerro Torre massifs have become far more popular that the Paine area. In 2006 the Belgians Nicolas Favresse, Olivier Favresse, Sean Villanueva, Mike Lecomte and Philippe Ceulemans made an excellent attempt at freeing the line and although this dream team returned without the coveted first free ascent, they nevertheless managed to free a number of important sections and take the grade to 7c and A2.

After a decade-long hibernation, in January 2016 Mayan Smith-Gobat and Ines Papert brusquely woke Riders from its sleep and freed some pitches on the upper part of the route, taking free climbing difficulties up to 7c+. More importantly, they discovered some variations that rendered hitherto impossible central section climbable. With the face plastered in snow however the two were forced to give in to the inevitable and return home, but their new variations indicated that a free ascent - weather conditions permitting - was on the cards and only a question of time.

Smith-Gobat returned to Patagonia this January together with photographer Drew Smith and Brette Harrington, the talented young North American climber who shot to fame in 2015 for her solo ascent of Chiaro di Luna on Aguja Saint-Exupéry in the Fitz Roy massif. Harrington and Smith-Gobat had never climbed together before, and after climbing together for a week headed to the Paine towers.

The climber from New Zealand recounts "As Brette and I approached Torre Central our hearts sank, the lower slabs were fully covered in ice and ice snow, unrecognizable from last season, or anything we had expected. Our determination was still high as we battled through the snow covered and unprotectable low angle terrain. However, on reaching the more technical slabs, large amounts of verglas slowed our going and free-climbing became impossible. We were forced to use every technique we knew to get through the ice covered and often run out climbing."

Getting past these initial slabs required 4 weeks "because they were so iced up and too dangerous" and as a result they had to reconsider their objectives. "Our goal then changed" explained Smith-Gobat "to just making it through the first half of Riders on the Storm in any style possible." Smith-Gobat had reached the summit in 2016 and, realizing that free climbing the entire route was not possible, the goal became to just work on the crux pitches of the free variation in the central section of the route. Due to the stormy weather, the two had only 8 days in total on the wall, of which 3 days were spent working the crux pitches. They got just one lead attempt each the crux pitches before the extremely unstable weather forced them to abandon their expedition, but Smith-Gobat concluded "Though the trip did not go to plan at all, we all learnt a lot and in our final days Brette and I confirmed that the crux pitches go free for sure and are planning to return next season."

02.03.2016
Patagonia: Riders on the Storm repeated by Mayan Smith-Gobat, Ines Papert and Thomas Senf
Over a 15-day period from 16 January to 20 February Ines Papert, Mayan Smith-Gobat and Thomas Senf repeated Riders on the Storm (7c+, A2, 1300m), the iconic multi-pitch rock climb up the Central Tower of the Torres del Paine in Patagonia. Although some sections were climbed with the use of aid, new variants were discovered thus coming one step closer to the sought-after first free ascent of one of Patagonia's crown jewels.