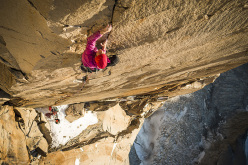 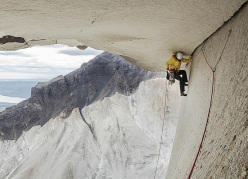 Ines Papert climbing "The Rosendach", pitch 27 of the route Riders on the storm on the Central Tower of Paine, Patagonia
Photo by Thomas Senf 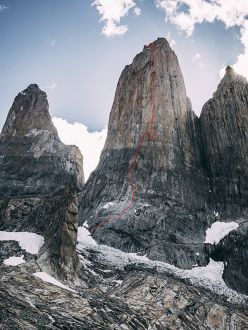 Riders on the Storm, Torres del Paine, Patagonia, first climbed in 1991 by the Germans Norbert Bätz, Peter Dittrich, Bernd Arnold, Wolfgang Güllich and Kurt Albert, with the variant discovered in 2016 by Mayan Smith-Gobat and Ines Papert
Photo by Franz Walter

Over a 15-day period from 16 January to 20 February Ines Papert, Mayan Smith-Gobat and Thomas Senf repeated Riders on the Storm (7c+, A2, 1300m), the iconic multi-pitch rock climb up the Central Tower of the Torres del Paine in Patagonia. Although some sections were climbed with the use of aid, new variants were discovered thus coming one step closer to the sought-after first free ascent of one of Patagonia's crown jewels.

On the 6th of February 2016 Germany’s Ines Papert and New Zealand’s Mayan Smith-Gobat, accompanied by Swiss photographer Thomas Senf, summited Torres Central in Patagonia’s Torres del Paine National Park having repeated Riders in the Storm up the mountain's East Face. Their ascent is believed to be only the fifth known ascent of this historic route in its 25-year history.

This stunning line up the sheer 1300m East Face of Torres Central was first climbed by the Germans Wolfgang Güllich, Kurt Albert, Bernd Arnold, Norbert Bätz and Peter Dittrich in January 1991 after fifteen days of climbing spread out over a six week period. The climbing went at 7c, A3 and, as such, it heralded a new era of difficulties in Patagonia. Since then there have been a handful of attempts at freeing the entire route, notably that of the Belgians Nicolas Favresse, Olivier Favresse, Seán Villanueva, Mike Lecomte and Philippe Ceulemans in 2006, but despite making progress, all returned home without having freed the entire line. Over the years this big wall has transformed into a crown jewel - not only in Patagonia - and the first free ascent is a coveted, ambitious and important challenge.

The trip began with stable weather and during their first weeks on the wall the pair discovered a very difficult five-pitch variation to avoid the lower aid section that had stumped previous parties. Before investing time in free climbing these difficult lower pitches though, Papert and Smith-Gobat chose to make the most of the stable weather and focus on freeing the upper section of the route in order to reach the summit.

On the last day of the weather window and after 3 weeks on the wall, Smith-Gobat succeeded in freeing pitches 30 and 31 in the early morning sunshine, shortly before the upper crack transformed into a waterfall of melting ice from above. The trio then continued quickly on to the summit of Torres Central, which was reached at 12:48 on the 6th February on a stunning and surprisingly wind still day.

The team’s euphoria was quickly dampened by rock fall hitting their portaledges later that night, tearing Ines' and Mayan’s ledge open and narrowly missing them. Shaken yet still determined to finish the route they returned to work on free climbing the lower pitches on their 5-pitch variation. Soon however they discovered that, particularly in warm weather, this section is fairly exposed to both ice and rockfall plummeting directly from the top of the peak - comprised of loose blocks held together by ice.

Despite ever-deteriorating weather the team battled on and managed to free all but two pitches of the original route (11 & 23) and the two most difficult on their new variant (17 & 18). Unfortunately during their last ten days the bad weather proved relentless, with winds up to 175 km/h and snowfalls down to 500m. The entire route became plastered in snow and with no further chance of attempting the line they ended up retrieving their gear when the storm abated slightly.

Although Papert and Smith-Gobat didn't succeed in freeing the entire route, they consider their trip to have been extremely successful. They managed to pull off a rare repeat of Riders on the Storm on the 25th anniversary of its first ascent and, importantly, they freed two pitches that had thwarted previous parties - with noteworthy difficulties up to 7c+. In addition, in order to avoid another aid section they discovered a variation to the original line which, although likely to be very difficult, they believe will certainly go free.

Due to the unpredictable risks on the East Face, Papert has decided against returning in the future, however Smith-Gobat is motivated to attempt the route again next austral summer.


17/02/2006 - Belgians repeat Riders on the Storm, Patagonia
A strong young Belgian team comprised of Nicolas Favresse, Olivier Favresse, Seán Villanueva, Mike Lecomte and Philippe Ceulemans has made a rare repeat of Riders on the Storm, situated in the Torres del Paine and undoubtedly one of the crown jewels in Patagonia's repertoire of classic climbs.