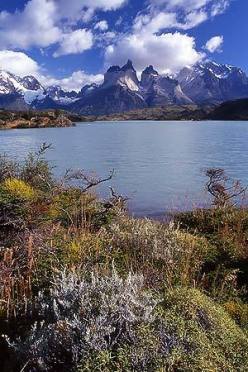 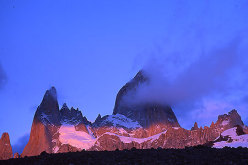 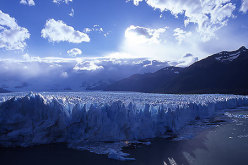 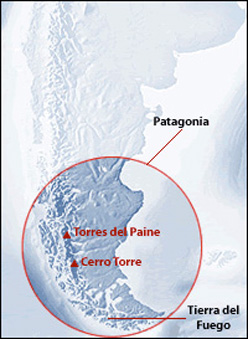 Trekking in a magical and mysterious land: three magnificent walks around the Torres del Paine, Fitz Roy and Cerro Torre, the stone heart of Patagonia.

Patagonia: this name evokes images of rugged, imposing, inaccessible mountains and vast stark plains, stretching down from the pampas in the north for thousands of kilometers through Argentina and Chile to the southernmost tip of the South American continent. Plains, endless and windswept, open yet inhospitable, devoid of all but the most resistant and determined. One thing only is constant here: the driving, incessant wind that swirls threateningly over the Andes before blowing unchecked out into the Atlantic Ocean. Within these barren, monotonous plains hides an inexplicable, intrinsic beauty that captivates and fascinates. This culminates when, travelling westwards, the imposing Cordillera rise still distant from these unlimited horizons.

Although no longer as remote or wild as it once was, this final stretch of the 12200km long Andes still remains a formidable challenge to the best mountaineers in the world. And as the only way of reaching this is either on horseback or on foot, mountains such as Cerro Torre, Fitz Roy and the Torre del Paine have justifiably become highly popular trekking routes. Those in search of adventure will not be disappointed; Patagonia remains, to this day, a magical and mysterious land. And even though it is becoming a victim of its own success, much remains still to be discovered, with a little effort, off the beaten track.


ARGENTINA - PARQUE NACIONAL LOS GLACIARES
Parque Nacional Los Glaciares came into existence in the late 1930’s and in 1982 UNESCO, recognising the park for its unique and outstanding natural beauty, declared it a World Heritage Area. The world famous Perito Moreno glacier lies in its southern section, whilst the Fitz Roy area is situated in the remote northern section. The Fitz Roy area offers spectacular and highly rewarding short treks up to Cerro Torre and Fitz Roy. These granite peaks are often shrouded in cloud or lashed by high winds, but on calm days they, and the entire massif, act as a stunning backdrop to the barren steppes over 2000m below. There are of course many other rewarding treks apart from the two described here, including the much longer Fitz Roy circuit.

Getting there: El Chalten is the starting point for most trekking routes in the Fitz Roy area. This is reached by a daily bus service in summer from El Calafate, over 200km away.
Accommodation: El Chalten is quickly waking up to the new opportunities brought about by the trekking boom. Accordingly, there is now a wide range of different up-market places to stay as well as cheaper accommodation. There are plenty of cabins with bunkbeds and cooking facilities specifically made for trekkers, and there is also an extremely popular Youth Hostel that is best booked in advance. Free camping is available at Campamento Confluencia and Campamento Madsen (no facilities), but there is also a good campsite with basic facilities close to the Fitz Roy Inn.
Supplies: Small supply shops in El Chalten offer all basic products but a much wider choice can be found at the supermarkets in El Calafate.

CHILE - PARQUE NACIONAL TORRES DEL PAINE
Parque Nacional Torres del Paine was created in 1959 by the Chilean Government to protect it originally from sheep and cattle overgrazing and in 1978 it was declared part of World Biosphere System by UNESCO. The park, rising out of the barren steppes, is of astounding beauty: deep lakes are fed by raging rivers cut steeply into lateral valleys, dominated by towering peaks, mythical to mountaineers and trekkers alike. The magnificent Cuernos del Paine and the three granite pillars that have given the park its name are a powerful testament to the last ice age, whilst the ever faster receding glaciers are a poignant reminder of how fragile our ecosystem is. Conservation efforts over the years have brought their rewards: the guanaco, once a dying breed, now roam in abundance and ñandú and flamingos can be easily observed, too. The trekking opportunities here are in many respects unparalleled. The world famous Paine circuit offers a fabulous insight into this area, and those who are lucky enough to have more time can explore further still. Parque Nacional Torres del Paine will not disappoint.

Getting there: The starting point for the Parque Nacional Torres del Paine is Puerto Natales. From Puerto Natales various bus operators offer open-ended return tickets to the park, almost 120km away. Buses depart at around 7 am and take over 4 hours to reach the park. The main entrance is Guardería & Rifugio Laguna Amarga, at the northern end of the park; all tourists are brought here and they must purchase a park permit and register before entering. Buses then continue to the Sede Administrativa Lago del Toro, from where most depart in the early afternoon for the return trip to Puerto Natales.
Accommodation: There are various hotels within the park, but most trekkers opt either for the Refugios, which cost little in comparison, or the campsites. The main campsites are Camping Pehoè, Camping Rìo Serrano, Camping Laguna Azul and Camping Las Torres. Other smaller campsites and Rifugios (in various states of disrepair) are situated along the trekking routes.
Supplies: There are no supply shops within the park. Bring all food from Puerto Natales.

GENERAL INFORMATION
Best time of year: Patagonia lies in the Southern Hemisphere: seasons are therefore inverted and the driest months are December to March. January and February, the height of summer, are the most stable and popular. A three week trip should be regarded as the absolute minimum, whilst those more fortunate will find three months more appropriate.
Getting there: This article describes treks in the Parque Nacional Torre del Paine and the Parque Nacional Los Glaciares, situated in Southern Patagonia.
Parque Nacional Torre del Paine is reached by travelling from Santiago to Punta Arenas by air and continuing by bus to Puerto Natales. Alternatively, Puerto Natales can be reached from Argentina by bus from either Rio Gallegos or El Chalten from November to March.
Parque Nacional Los Glaciares is reached by travelling from Buenos Aires to Rio Gallegos by air and continuing by either by air to El Calafate or by a 4 hour bus-ride. Alternatively, El Calafate can be reached from by bus from Puerto Natales, Chile from November to March.
Accommodation: Hotels, Casas de Familia (B&B’s) and campsites exist in all major towns. Youth Hostels can be found in El Calafate and El Chalten, but not in Puerto Natales.
Food: Eating out is gratifying; Argentinian meat is world famous and so too is Chilean red wine. Those on a tighter budget will find supermarkets well stocked but expensive, as all food needs to be transported south.

Other sights worth seeing
- No trip to Southern Patagonia is complete without at least a day spent at the “truly wonderful” Perito Moreno glacier. Organised buses are frequent, but unfortunately do not offer the freedom one desires to explore and contemplate.
- Ushuaia, the southernmost city in the world, is in many respects a big disappointment and so too is the highly restricted Parque Nacional Tierra del Fuego.
- The Reserva Faunística Penísula Valdés, on the Atlantic Ocean and in the NE of Patagonia, is one of the great wildlife reserves in South America. It is worth making the effort.

Final considerations
Paying by credit card is widely accepted, but not everywhere. Banks exist in all major towns as do cash machines in Puerto Natales and El Calafate. Nevertheless, a supply of traveller’s cheques is recommended.
- The main form of transport for most travellers is by bus. Rival bus operators offer similar packages and prices, but differ in their departure times, dates and, for El Chalten, their pick up and drop off points. Spend plenty of time gathering all the necessary information from the tourist offices and various operators.
- Private cars are few and far between, making hitchhiking a difficult enterprise. Unless you have plenty of time, do not rely on this as the main form of transport.
- Although bus connections to and from Parque Nacional Torre del Paine are frequent, within the park they are effectively non-existent and they race past fantastic sights at breakneck speed. Having personal transport in the park makes a big difference.
- Buy supplies in the supermarkets in Puerto Natales and El Calafate. There are no shops in Parque Nacional Torre del Paine, and those in El Chalten are expensive.
- A word of caution about the climate: when it decides to, it can play extremely rough indeed. These treks are not particularly demanding, but things can change dramatically in bad conditions. Gusty winds of up to 160km/h make progress extremely difficult and unpleasant, and can bring bad weather in a matter of minutes. Take all necessary precautions, even on the best of days. Having the right trekking gear is essential therefore.
- Water from mountain streams is safe enough to drink and so too is that of Laguna Capri, but it is nevertheless recommended practice to boil water for at least 5 mins. Use the designated loos in Campamento Torres and Campamento Poincenot, even if the former isn’t the most appealing.
- If planning to make a pre-dawn start check out some of the route the evening before. The fork in Campamento Rio Blanco, in particular, can be hard to locate in the dark. A headtorch is of paramount importance.