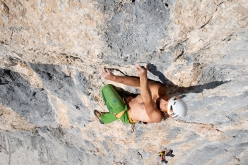 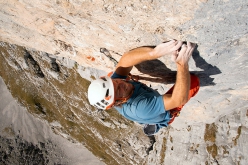 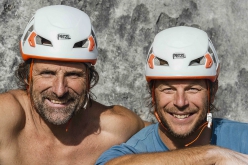 Alex Huber and Guido Unterwurzacher during the first free ascent of Koasabluad on Wilder Kaiser, Austria
Photo by Max Berger 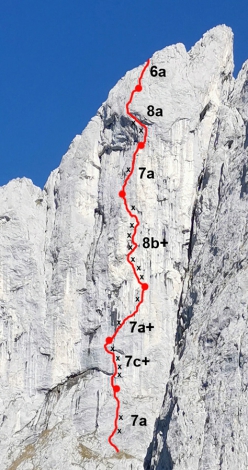 Alpinists Alexander Huber and Guido Unterwurzacher have completed Koasabluad, a difficult multi-pitch rock climb up Maukspitze in the Wilder Kaiser massif in Austria, where in 2014/2015 they established Südwind. Unterwurzacher reports.

In 2013, Alexander Huber and I stood below a brilliant line on Maukspitze in the Wilder Kaiser massif. At the time my uncle Tom, absolutely obsessed with climbing, had often told me about this line and said to me, "The pillar looks completely awesome!"

That's the reason why Alex and I joined forces once again in order to establish something new. As with all our joint first ascents, we wanted to rely mainly on trad gear, as far as this was possible and justifiable for us, and only place bolts at the most difficult sections. Scouting the route by abseil didn’t come into question, as this would have ruined the entire adventure.

After five extremely intese days climbing ground-up, marked by wild cliff hooks, trembling legs, long falls, pumpy forearms, mental exhaustion and some big grins, we finally reached the top of our new route. What an adventure! Overjoyed, we raised our cold beer glasses at the Ackerlhütte while our eyes wander back to the wall.

The first sessions on the route cleaning it and working the moves were somewhat sobering. We quickly realised that this wasn’t going to be a enterprise, certainly not for me as I felt it was out of my league. I also hurt my wrist at the belay stopping Alex’s really long fall and was out of action for a while. Winter came and the project was put on hold.

The wheel of life continued to turn and clocked up another 5 years, until this September when the we finally managed to find the time to get back on our project. Anticipation was high, what would the route feel like five years down the line?

Our first impression was "love at second sight". We were amazed at how determined we’d been during the first ascent and how demanding the runouts are on some sections, how fantastic the individual pitches were and how amazingly long, steep and pumpy the crux pitch was. We couldn’t wait to jump back on it

After about 6 days on the route this autumn, we succeeded in freeing this new Kaiserperle, this imperial peal, on 15 October 2019. The entire redpoint proved to be a really intense and rich experience with my good, forever young climbing partner Alex, as I completed one of my hardest first ascents up Wilder Kaiser. Both of us climbing the entire line free, on the same days, was the coronation of a dream come true. There are some sections that can potentially make your blood freeze, unless you have “Koasabluad”, royal blood.

04.04.2013
Alexander Huber, Sonnwand Nirwana above the Loferer Alm in Austria
In September 2012 Alexander Huber made the first ascent of the multi-pitch Nirwana 8c+ on Sonnwand, Loferer Alm, Austria.