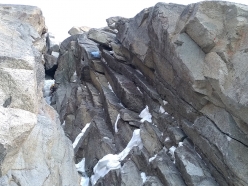 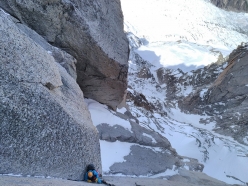 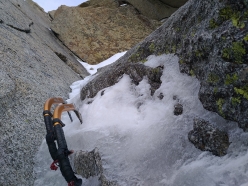 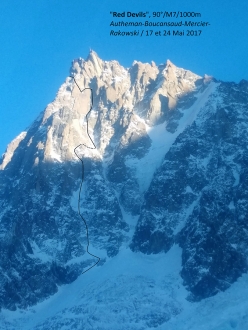 On 16 May Mercier teamed up with Lucien Boucansaud and Gérémy Rakowski and, after a bivy at Plan de l’Aiguille, began climbing at 4:30am on the 17th of May. Mercier told planetmountain.com “The climbing was harder than expected, and in the end there wasn’t enough time to climb the upper wall, because all of us have to go to work the day after. So, we chose to finish via the West couloir and where this ends cross leftwards to find the exit ridge of the Carli Chassagne route.

Mercier returned for a second attempt on 23 May with David Autheman. The two spent the night at the Cosmique hut and, after waking up at 3am, down climbed Glacier Rond and the traversed across this to reach the West Couloir. After sharing circa 150m of this, they then proceeded along the steep upper section of the face. This contained 90° mixed climbing graded M7, before finishing up grade 4+/5 rock for a pitch and a half. Mercier estimates the new route will take about 15 hours if climbed in a single day.

As to the name, Mercier explained "while I was the packing my bag for the 2nd attempt I was watching TV and heard about the terrible bomb in Manchester. Red devils is the name given to players of the Manchester United football team, but it’s also the name we could give to all those guys who kill children…"