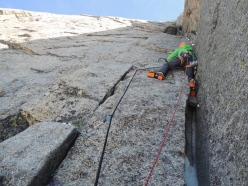 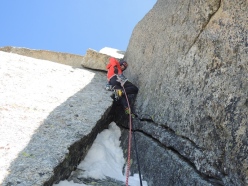 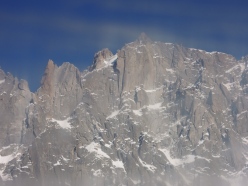 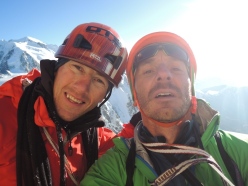 On 10/04/2014 Jeff Mercier and Corrado Pesce made the first free acent of the huge corner on the route established by Chris Bonington and Lito Tejada-Flores on 28 - 29 July 1965 up the West Face of Aiguille du Plan, Mont Blanc.

"At noon, after climbing some 1350 feet of rock, we ran into the upper pillar or buttress, which presented only one (ugh!) weakness: a great, north-facing dihedral, plastered with ice and stretching some 650 feet up and out of sight. Chris took over the lead, and what followed was the most amazing demonstration of mixed climbing I have ever seen." These words, written by Lito Tejada-Flores and published in the 1966 edition of the American Alpine Journal, recount the first ascent of the spur and obvious corner the cuts clean up the West Face of Aiguille du Plan, climbed by Tejada-Flores and Chris Bonington on 28 and 29 July 1965.

As can easily be gleamed from the text, this was a massive, two.day undertaking during which the superb alpinists breached the spur to the left of the Greloz-Roch route to then climb the obvious, succulent corner where Bonington displayed all his undisputed ability and class. At 2/3 height the duo chopped a small ledge and bivied, while the summit was reached without further difficulties the next day. The ascent was carried out at great speed, even by today's standards and - it's worth remembering - with a completely different rack of climbing gear. The invention of Friends that would revolutionise climbing was still a decade away and so, apart from climbing long run-out sections, Bonington and Tejada Flores were forced to breach difficult aid up to A2. With modern climbing gear these sections are "neither dangerous nor difficult to protect" according to Corrado Pesce, the highly talented Italian resident in Chamonix who free climbed the upper section of the route last Thursday together with Frenchman Jeff Mercier. The two climbed the splendid 250m high corner after having ascended the Valentine goulotte (WI3/4 M3+) instead of following the original line up the spur since this has been subject to countless rockfall in recent years.

"Bonington and Tejada-Flores pulled off an amazing ascent" Corrado Pesce told Planetmountain excitedly "I was really struck. Back in those days they were used to climbing at altitude, up steep terrain, lightweight and so they'd developed the ability to be very, very fast indeed. Even today those times are superb, akin to those of a top level athlete. To this you need to add the gear factor: they didn't have Friends and large cracks were therefore a difficult obstacle that forced them to resorting to aid. In many respects theirs was an extreme alpinism." Perhaps it is for this reason that, despite its obvious beauty and vicinity to Chamonix, the route fell into oblivion. Slumbered away, unjustly. Because as Bonington himself had written after the ascent, the corner "would give delightful climbing all the way". Now, almost 50 years after the first ascent, this has finally been confirmed.

The good conditions in early April led me and my climbing partner, the evergreen Jeff Mercier, to try and pinpoint which of this massif's countless possibilities could provide us with a quality adventure. As sometimes happens, a little imagination and a quick glance at a particularly attractive line provided us with the necessary input. In the past I've often chosen to climb routes on the basis of their prestige, on their reputation based on the fact that they proved a challenge and adventure for many climbers before me. But the more these routes are repeated, the more this "adventure capital" slowly erodes, while others just lie there and wait to be brought to light and offer a quality adventure to those who lay their hands on them...

In short, this route lay right in front of me, I could see it from home, as I drove by car, from the Aiguille du Midi cable car and even from the bars at Chamonix. A gigantic corner, so impossible to ignore that the thought never even occurred to me that it might still be unexplored! No, not in this valley! A quick search in the priceless 1974 Vallot guidebook and the mystery was revealed: a route cut clean through it, established by Sir Chris Bonington and Lito Tejada - Flores in the summer of 1965 with one bivy. For us the sections of grade 6 and aid didn't mean much as we had kilos of Camalot cams and wires, while they had pegs, wooden wedges and perhaps some granite chockstones that could be wedged deep into the chimneys... highly adventurous but not much use for a free ascent. What really caught our attention was the fact that they had encountered icy conditions, probably due to the fact that the back of the corner is almost always in the shade. A vague hope of stumbling across some ice and the thought of checking out those aid pitches seemed to offer an excellent excuse to try this beautiful line.

Due to our respective work commitments we don't have much free time, so we took the first cable car to Plan dell'Aiguille and made swift progress across the early morning, hard-packed spring snow to reach the base of the face. In order to be as light as possible we opted to take just one rucksack and so the numerous alpinists and skiers looked at Jeff with some curiosity as he set off with a dozen Camalots clipped to his harness and a shopping bag in hand. We chose to reach the corner via the goulotte Valentine, a far more pleasant outing than the spur originally climbed by the first ascentionists in summer that now, like several other portions of this face, is subject to rockfall and collapses.

The initial gully offered beautiful, not too difficult climbing that enabled us to warm up and gain altitude quickly. We then traversed across a snow slope to reach the base of the huge dihedral and were greeted by a first surprise: the rock looked excellent. And then a second surprise: there was some ice, so the end justified the means! Each pitch we climbed resulted in shouts of excitement, the climbing was beautiful and there was plenty of gear. Slowly but surely we devoured the giant corner. A couple of deep chimneys and some extremely thin cracks offered the biggest difficulties and more shouts for joy. Time goes fast when you're having fun and in the late afternoon we shook hands on the summit. We quickly took in the view, incredulous that we'd had such a satisfying day and then set hurried across to reach the Requin hut in the last light of day.

And what about the aid? Poor Bonington, on those wide cracks without Camalots and especially without the ice axes! We breached all this with some dry tooling, free and onsight. Now that I've talked about this route, its "adventure capital" is already decreasing. So instead of looking carefully at the topo why not head out to Chamonix and look up at the huge corner on Aiguille du Plan. If you do so now you'll experience a quality adventure. In the future this might be considered a prestigious climb.

Thanks to: La Sportiva, Adidas and Black Diamond

AIGUILLE DU PLAN
West eperon. First ascent. July 28 - 29, 1965.
C. J. S. Bonington, R. Tejada Flores; standard, ED.
This route runs up the conspicuous eperon to the left of the Greloz-Roch route and then takes the clean-cut groove immediately above, up the steep upper wall. The eperon gives delightful climbing of IV and V. The groove is steep and difficult, with pitches of VI and A2. It was particularly hard on the first ascent owing to heavy icing; when clear, it would give delightful climbing all the way. Sixteen hours of climbing, with a bivouac near the top; in good conditions it would go easily in the day. 2,500 ft. of climbing. (as published in the 1965 Alpine Journal)

Repeated by Jeff Mercier and Korra Pesce on 10/04/2014 of the upper section, the 250m corner, M7 max, reached via the Valentine goulotte WI3/4 M3+
Gear: Friends, nuts and some ice screws.