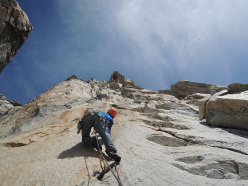 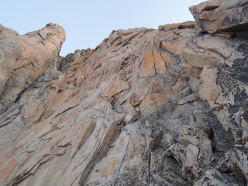 In mid-July Chamonix-based mountain guides Vincent Fournier and Jeff Mercier made the first ascent of Efareb, a new rock climb on the Tour Jaune, the obvious tower to the right of the famous Couloir en Y. Mercier had climbed this tower in 2014 together with Fabien Dugit and noticed that despite its modest height, the potential and atmosphere was superb. Furthermore, the hanging corner between the 1968 Ravanel-Bellin route and Élévation was an invitation he simply couldn’t resist.

After spending the night at the Refuge d’Argentière, Mercier and Fournier set off early to avoid rock fall in Couloir en Y and then ascended 200m of easy terrain to reach the base of their line. As it happened, on a terrace they stumbled across a cache of old pitons and wooden wedges. They took two to display at the hut, then started up the route.

"To share the cake, we swung leads. The size of the cracks was often identical, we quickly ran out of pro and this forced us to climb relatively short pitches" explained Mercier, adding "But the weather was great that day and it wasn’t worth taking any unnecessary risks." Mercier and Fournier climbed 7 pitches past difficulties up to 6b+ before joining the original route and following this for another 1.5 pitches to the arête before adding another 6 new pitches up the final wall.

Efareb totals circa 1200m in height from the Bergschrund to the summit and has been described by Mercier as "a very complete alpine outing". For the record, the two reached the summit of Aiguille d'Argentière precisely 151 to the day of the mountain's first ascent, carried out by Edward Whymper and Michel Croz, together with Anthony-Adams Reilly, Henri Charlet and Michel Payot.