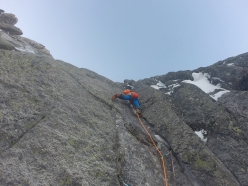 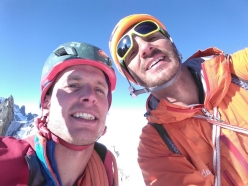 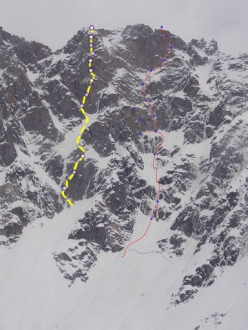 On 5 May 2016 Jeff Mercier and Simon Chatelan made the first ascent of 'Universal Studio', a new mixed climb graded M8/650m on Rognon du Plan (3601m) in the Mont Blanc massif, France.

French alpinist Jeff Mercier and his Swiss partner Simon Chatelan have pulled off an interesting first ascent in the Mont Blanc massif, climbing a difficult new mixed route up the north-west face of Rognon du Plan, the 3601m high peak to the west of the more famous Aiguille du Plan.

Mercier and Chatelan set off early on Thursday 5 May from bivy at Plan de l'Aiguille and after having made the 2 hour approach, reached the base of the face at 6.00 am. They started steeply up a gully to the right of Fin Givré (Christophe Beaudoin, Andy Parkin, 1991) and climbed four pitches which led to the foot of the rock bastion, which they reached at 9:00am after having crossed the line of Sylcris  (Christophe Profit, Dominique Radigues, Sylviane Tavernier, 1985)

It is at this point that thee real difficulties began: seven sustained pitches between M6 and M7+ brought climbers to the technical crux, a well-protected but pumpy M8 corner just one pitch short of the top. The two summited at 18:00, then proceeded along the Midi-Plan arete to Aiguille du Midi.

Called Universal Studio, the new route is described by Mercier as "probably the most sustained in this sector" and, commenting after the ascent, the Chamonix mountain guide stated "It’s a rare privilege to find blank lines this beautiful in this Disney Land we call Mont-Blanc. At times, Disneyland is interpreted as being something accessible to everyone… to all those who pay to enter, but personally I prefer to think of it as somewhere where the imagination has no boundaries."