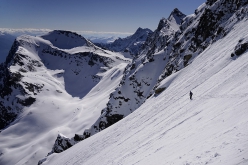 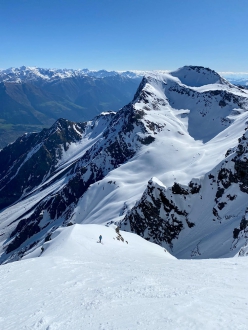 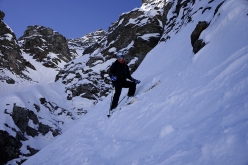 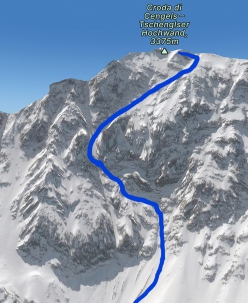 At the end of May Florian Cappello and Roland Stricker skied a new line down the North Face of Tschenglser Hochwand / Croda di Cengles in the Ortler - Cevedale range, Italy.

After having studied the North Face of Tschenglser Hochwand / Croda di Cengles for a few yeas, conditions were perfect to ski it the other day. It's not often that you can ski this route because of avalanches and ice in the middle section. But Florian Cappello and I were lucky to have such good snow at the end of May, and we managed to ski the entire line.

We started from Sulden and climbed the mountain via the normal route before skiing the North Face in perfect powder. After a long traverse we reached a steep gully with a rocky crux, after which we exited leftwards. Finding the correct route isn’t easy at this point so you have to study the line carefully beforehand.

03.06.2020
Ortler & Königspitze paralpinism linkup by Aaron Durogati, Bruno Mottini
Aaron Durogati reports about his Monday 3 June ascent with Bruno Mottini of the North Face of Ortler and the NE Face of Königspitze / Gran Zebrù. The duo enchained the mountains using a paraglider and needed 9.5 hours for the linkup.

19.10.2017
Gnadenlos, difficult and dangerous new Ortler ice climb
On the NW Face of Ortler (3905m) Daniel Ladurner, Johannes Lemayer and Herbert Plattner have made the first ascent of 'Gnadenlos', a new icefall described as 'WI5 with great risk'.

11.01.2016
Ortler Trinitas: Riegler brothers complete their South Tyrolean trilogy
Florian Riegler reports about his ascent of Trinitas (WI4, M5, 1000m), a probable new route up the NW Face of Ortler climbed on 27/12/2015 together with his brother Martin Riegler. With this ascent the two South Tyrolean alpinists have completed the trilogy of new routes that includes the summits of Königsspitze and Monte Zebrù.