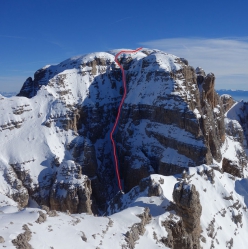 Cima Brenta in the Brenta Dolomites and the obvious, beautiful West Gully. The route drops in from Cima Occidentale and reaches the point where the gully starts up the south face
Photo by Luca Dallavalle, Roberto Dallavalle 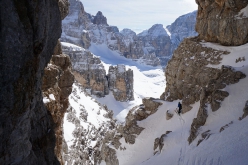 Cima Brenta West Couloir skied by Luca Dallavalle and his brother Roberto on 09/03/2019. There is currently no definite information of previous ski descents of the West Gully but given how logical this line is, it may have been skied previously.
Photo by Luca Dallavalle, Roberto Dallavalle 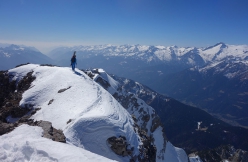 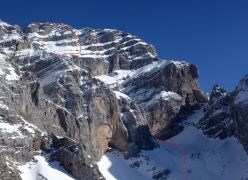 Cima Brenta west couloir
The west couloir of Cima Brenta is a beautiful gully that descends right from summit of Cima Brenta Occidentale. I’d noticed it this winter from Cima Mandron and it’s beauty blew me away. There wasn’t much snow and I promised myself to come back when conditions were better. On Saturday 9 March with my brother Roberto we ascended via the south face and then dropped in.

We encountered very good conditions, skiing down the powder was great fun. At the bottom the couloir twists south and at a spectacular fork the skiing ends. From here you have to down climb or make to abseils (45m + 15m approximately) to join the normal route up Brenta’s south face

After a short break we decided to ascend another gully that climbs to the col that separates Cima Brenta from Cima Mandron, in order to savour the long powder descent from Massari to Vallesinella. This gully was climbed by Alessandro Beber and Marco Maganzini in 2014 after their first descent of the Brenta south face and skied by us in January, while the complete route with the west couloir was ascended this winter. I have no definite information of previous ski descents of the West Gully but given how logical this line is, I don’t exclude that it may have been skied previously.

Cima del Vallon northwest face
Cima del Vallon is the highest peak in Southern Brenta, a really wild mountain despite the fact that its imposing northwest face cannot be ignored from both Val Rendena and Madonna di Campiglio. The line we skied in the center of the NW Face is obvious and beautiful, but also extremely exposed. It includes a traverse (mixed climbing, not skiable) that leads to the central ledge system. The upper section is very steep while the angle eases on in the central part of the route.

We encountered very good conditions during the ascent, but had to be careful on the lower section where the snow was still frozen. Having exited the face we enjoyed another beautiful gully that leads to the base Busa di Sacco face. This gully is far simpler and has already been used in order to gain the summit via the normal route that ascends the ridge to the north of the summit.