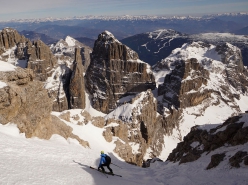 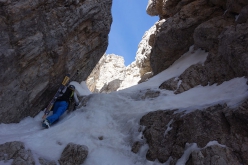 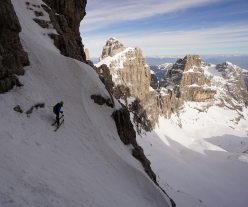 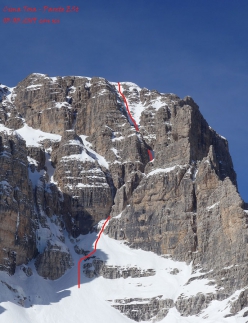 Luca Dallavalle reports about the probable first ski descent of the east face of Cima Tosa in the Brenta Dolomites, climbed and skied on 03/03/2019 with his brother Roberto Dallavalle.

Cima Tosa is the highest mountain in the Brenta Dolomites, it’s always exerted a certain charm on me. In addition to the classic Canalone Neri, in past years I’ve enjoyed skiing some of its lesser-known gullies such as Canale Graffer to the south or Canalone Ovest to the west, an beautiful line first skied by Tone Valeruz.

I’d been thinking about the East Face route for quite some years and often studied photos of the mountain, but I always discard the idea due to the extremely long approach and the fact that nowhere can you reccie the lower section with it’s hidden, extremely narrow gully.

On Sunday, after several days of good weather, the snow was packed hard and had transformed considerably, so since the approach would be much quicker we decided to give it a go. With my brother Roberto we started from Madonna di Campiglio, skinned up through the entire Brenta valley to Bocca del Brenta, then descended to the Pedrotti hut and traversed up the wide valley that leads to the wild east face of Cima Tosa.

During the climb we checked out the conditions and on the summit we decided they were sufficiently good to drop in. We really enjoyed the ascent, wedged in a very beautiful setting with a direct view onto Campanile Basso and Brenta Alta. During the 550m descent we climbed just two sections (35m + 5m), all the rest was skied. We had hard-packed snow, at times even icy, and although this helped us save energy during the ascent, it requited total concentration during the descent. A mistake here would have proved costly.

The line has been ascended several times in the past by Franco Nicolini in spring, but previously it has almost certainly never been descended on skis. It was a testing but satisfying day out in the mountains.