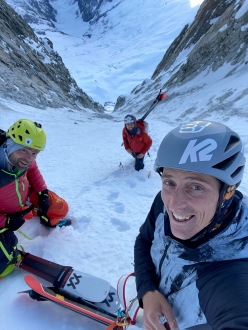 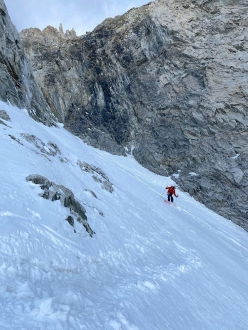 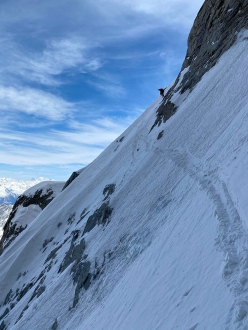 On 9 May 2021 the three mountain guides Paul Bonhomme, Vivian Bruchez and Gilles Sierro completed the first ski descent of the SW Face of Bietschorn in Valais, Switzerland

The avant-garde of European extreme skiing has hit the mark once again in this apparently never-ending season with the first ski descent of the southwest face of Bietschorn, the 3934m peak located in the Valais, Switzerland. On Sunday 9th May 2021 the "usual suspects" Paul Bonhomme and Vivian Bruchez teamed up, this time with Gilles Sierro, and scoped an impressive 900-meter "direttissima" with difficulties in the region of 5.4 E4. The three steep skiers negotiated the face that drops below 50° without having to resort to abseils.

After meticulous preparation due to the complex weather conditions, the trio had decided to ascend to the Bietschihütte on Saturday 8 May just to have a look at the summit. However closer inspection of the face through their binoculars revealed that the line Bonhomme had envisaged seemed to be in good condition and so at 1am on 9 May they had breakfast, before spending the next 4 hours reaching the base of the face. They reached the summit at around 8 am and then 2 hours of total concentration were required for the descent.

"The line is really wonderful, very steep all the way and the cliffs all around are just mystical!" Bonhomme told planetmountain.com. The descent has been called Merci mamans, as it was Mother's Day in Switzerland and also because the alpinists wanted to thank their wives for allowing them climb in the mountains so frequently.