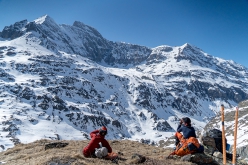 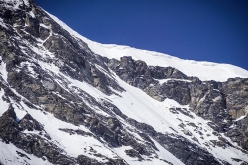 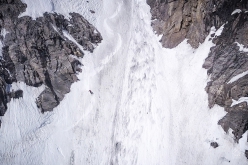 On 1 April 2021 French alpinists Paul Bonhomme and Vivian Bruchez made what is likely to be the first ski descent of the east face of Combin de la Tsessette (4141m) in Switzerland.

At the very start of the month French mountain guides Paul Bonhomme and Vivian Bruchez made an important "raide" down the east face of Combin de la Tsessette, the splendid 4141m peak in the Grand Combin massif in Switzerland. In all probability this is the first ski descent of the east face, via a highly extremely exposed line now dubbed Les Piliers de Bagnes.

On reaching the summit the two were forced to downclimb for about fifty meters, then abseil for about thirty meters before putting on their skis and starting the descent above the huge void. In order to reach the middle ramps they had to put on their crampons once again for a dozen meters, after which they skied more easily down into Val de Bagnes. The lower couloir had been skied before, circa 25 years ago by the late Marco Bruchez.

In total the descent tackles 1200m altitude difference and difficulties in the region of 5.4(+)/E4 and joins an impressive list of new ski descents explored by the duo this year that include Tête Carrée in the Mont Blanc massif in mid-March and Mont Blonnière in early January.