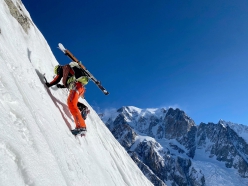 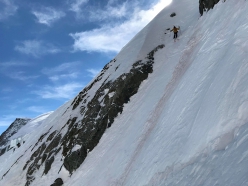 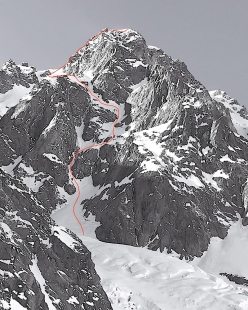 The line of 'La Testa tra le stelle' on the SE Face of Tête Carrée in the Mont Blanc massif, skied for the first time on 10/03/2021 by Paul Bonhomme and Vivian Bruchez
Photo by Christophe Angot / Linka production

On 10/03/2021 Frenchmen Paul Bonhomme and Vivian Bruchez skied the SE Face of Tête Carrée in the Mont Blanc massif. Called La Testa tra le stelle, the line is likely to be the first ski descent of this face.

French mountain guides Paul Bonhomme and Vivian Bruchez have made what is reputed to be the first ski descent of the SE Face of Tête Carrée in the Mont Blanc massif.

The two skiers set off from the Skyway parking lot in Courmayeur at 3:30am on Wednesday 10 March and, skinning up the Val Veny, reached the bottom of the mountain at 8:30am. They climbed up the SE Face and reached the 3732m summit at midday, before dropping in to ski the new, 1000m line without any abseils. They returned to their car at 15:30 having covered 40km of terrain with 2600m elevation gain. The line has been graded 5.3/E4, is called La Testa tra le stelle and is described by Bonhomme as "vraiment un beau voyage", a truly beautiful journey.

At the start of January the Frenchmen teamed up to make the first ski descent of Le Jardin Secret on Mount Blonnière, and this latest descent is now the 6th new line scoped by Bonhomme this winter.