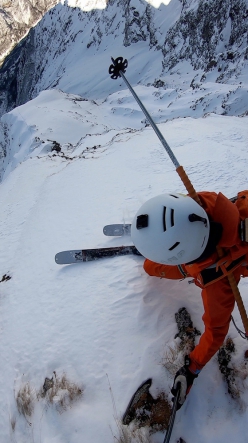 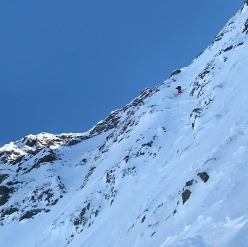 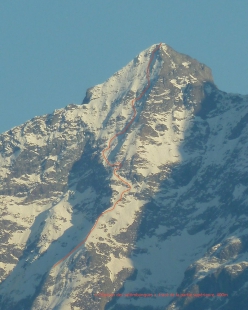 The line of Éperon des Saltimbanques on the North Face of Chaperon in the French Alps, skied for the first time by Paul Bonhomme and Xavier Cailhol on 19/01/2021
Photo by Paul Bonhomme

Paul Bonhomme and Xavier Cailhol have made the first ski descent of the hitherto untouched North Face of Chaperon. Éperon des Saltimbanques is 1200m long and been graded 5.4/E4

Extreme skiers Paul Bonhomme and Xavier Cailhol have made a once-in-a-lifetime run to score the first ski descent of the North Face of Chaperon above the Valgaudemard valley in the Écrins massif of the French Alps.

In his quest to ski 10 new lines this winter, Bonhomme stumbled across an old photo of the wild face and after some quick research he realised that although it had been a coveted objective some 20 years ago, it had in all likelihood never been skied before. Entirely untouched faces in the Alps are an extremely rare commodity these days and the allure a 1200m new line proved impossible to resist.

On 19 January Bonhomme and Cailhol reached Saint Firmin at 7:00am, half an hour before the bakery opened but with the 1900m ascent in mind they decided to skip their croissant and started the climb, reaching the 2750m summit at 12:30. The descent, at times down highly exposed 50° slopes, followed the line of ascent and is described as being "truly extraordinary in terms of its expanse and diversity; during the descent we made steep, tight turns and large, full curves! The line is obvious and a major addition."

The 1200m long Éperon des Saltimbanques has been graded 5.4/E4 and has understandably caused quite a stir, so much so that it even received official thanks from the tiny village Saint-Firmin du Valgaudemar.