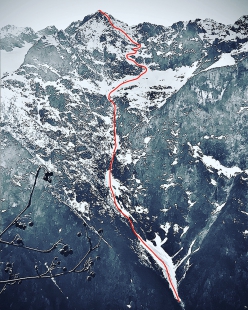 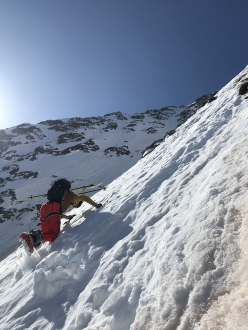 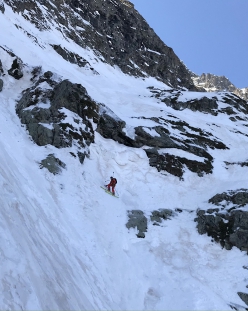 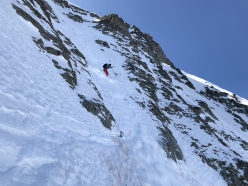 After the first ski descent of the North Face of Chaperon at the end of January, at the start of March French extreme skiers Paul Bonhomme and Xavier Cailhol teamed up once again to ski a partially new linedown the NE Face of Rochers du Rochail (2853m) in the Oisans massif. While the upper 600m had been skied by Cédric Colomban and friends in 2015, the remaining 1000m had not been skied previously.

Bonhomme and Cailhol set off early on 6 March and climbed up the the steep gully, requiring 4.5 hours for the ascent before starting the taxing descent that required total concentration for the next 3.5 hours. Loose, unconsolidated snow on the upper section gave way to compact snow on the lower section, and the line has been graded 5.4-5.5/E4 overall.

"With its towers, naves and columns, La Cathédrale remains a very serious undertaking that requires optimal, stable conditions: too much snow and it transforms into Russian roulette and a real challenge because of the line that needs tracing over 1600m, with too little snow the upper section is no longer possible."