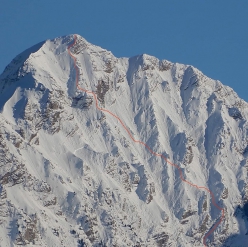 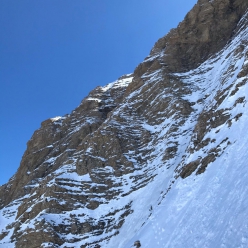 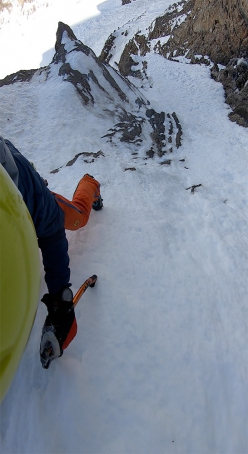 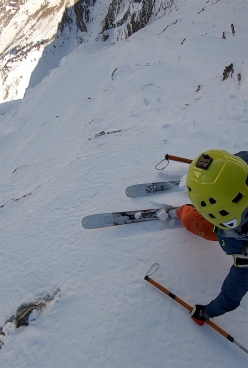 On 04/05/2021 the French mountain guide Paul Bonhomme made the first ski descent of the the West Face of Mont Pouzenc (Embrunais, France).

Although the coldest season, officially speaking, is long over, conditions up in the mountains are still extremely wintery across the Alps. Making the most of these, on the 4th of May French mountain guide Paul Bonhomme completed what is considered to be the first ski descent of the West Face on Pouzenc, a 2898m peak in the Embrunais massif of the Hautes-Alpes, France.

Starting at 5:30 am from Les Gendres at 1573m, he reached the base of the magnificent face at 7:30 am and then required 2 hours to reach the summit. After resting for half an hour he dropped in, skiing a leftwards trending line in about one hour. On the lower section he down-climbed for about 30 meters, and also negotiated a 50 meter traverse with skis strapped to his rucksack.

The enormous west face is both steep and exposed, and is guarded by a steep cliff which probably deterred suitors in the past. "The snow and the face were complex and needed some really strong steep-skiing skills. Thinking about every turn, finding the way meters after meters was really interesting. This descent is the eighth in my 10 x project" commented Bonhomme.

Rated 5.4/E4, the line has been called La traversée des Anges, The Angels traverse, in memory of the victims of the avalanches accidents in the French Alps on the 3rd May.