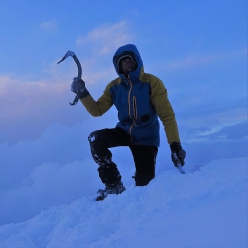 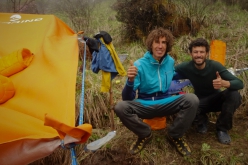 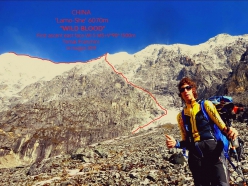 Tomas Franchini and the line of Wild Blood, ie his solo ascent of the East Face of Lamo She (6070m) in China carried out on 14/05/2019
Photo by Tomas Franchini

PORTFOLIO / gallery Portfolio: Tomas Franchini and his solo ascent of Lamo She in China

Tomas Franchini and his solo ascent of Lamo She in China

Interview with the Italian mountaineer Tomas Franchini after his solo ascent of the virgin East Face of Lamo She (6070m) in China. The 1500m new climb is called Wild Blood and was graded WI5, M5, V°, 90°

On May 14, 2019, Tomas Franchini soloed the hitherto unclimbed East Face of Lamo She in China. The Italian alpinist had reached the base of the 6070m peak with climbing partner Pietro Picco and together they laid the foundations for Franchini's ascent, which came about following his instinct and after what he describes as "an important decision." This success comes two years after his solo ascent of the West Face of Mount Edgar in China

Tomas, where do we start from?
From the luck that I had. We we lucky right from the start, because we discovered a small track used by those searching for medicinal herbs and this enabled us to enter the valley. Without this it would have been pretty much impossible since the forest was simply too thick. We had to keep an eye on the track and we lost it in places, but it allowed us to reach the head of the valley where we were greeted with the unclimbed east face of Lamo She.

So you then established base camp
Yes, at about 3400m, under the pedestal below the face. Establishing BC wasn’t easy. It rained every day and keeping moving wasn’t easy. Down in the village we had met two farmers and together we transported all the mountaineering gear and food for a month. Just a single journey! They were fantastic!

What was the Base Camp like?
Not five-star! The terrain was rugged, steep, pitching the tent was difficult, and we had to dig a small platform. What made this basecamp different from the others I’ve been to is that our tent really was our home here. We didn’t have a huge mess tent for cooking for example, just our three-man Ferrino tent. It was pretty cool!

And fairly intimate!
No joke! It was gear. And I really have to thank Pietro loads because without him my ascent would have been impossible. He helped me transport all the gear, ascended onto the face with me to stash the gear and see the mountain close-up for the first time. His help was fundamental.

At one point, however, you two split up
As I said the weather was always bad, we were always soaked down in base camp, it wasn't easy. It was often foggy, the approach up through the steep pedestal was tricky. I was sorry when he decided to go back home, I really didn't want him to return with a bad memory of this trip, but I understand his decision. I repeat, I couldn't have done this without him.

Then you started climbing on your own
The day Pietro left I set off to search for a more direct approach to the main face. We had deposited gear at 4400 meters and it was far way, not only in terms of height difference, but also in terms of distance, it was really far from our camp. That morning I climbed up the pedestal and managed to find a direct route to the wall. It was the only day of good weather, the one in the photo, and I asked myself "What do I do now?"

What do you mean?
I realised that I had to make an important decision. It was sunny, finally. But I didn't have the right gear with me, almost all of it was in the gear stash. I only had my ice axes and crampons. I thought about it for a while and then decided: I’ll go light. I’ll try to climb as fast as possible.

Sorry, what time was this, roughly? And what gear did you have?
Shortly after noon. 12:30 maybe when I started climbing the wall. I had ice axes and crampons, a jacket, a light down jacket. I didn’t have a harness nor a rope. In my rucksack I had 1 liter of liquids, 100 grams of meat, 4 energy bars. And a spare pair of gloves. In order to be as lightweight as possible I left the stove and sleeping bag at the base of the wall.

And…
I climbed fast! When I reached the summit it was about 7.00 pm, the bad weather was coming in and I hurried down the ascent route. It was technical, demanding. Not easy at all. With a bit of everything, ice, snow, mixed. It was long, about 1500 meters high, with the long final ridge. A beautiful, complicated route. Complete.

You descended in the dark
I didn't have gear with me for a bivouac, I didn't even have my stove, and I thought I'd sleep a little in the crevasse. But I'm not very fat, I felt cold so I kept descending. Then the fog came and I got a little lost at the base of the wall. I sheltered behind a boulder and rested for a few hours, then I made it back to base camp. I’d say it was a somewhat special day.

Absolutely! Then you returned home?
No, I stayed on for a while because I wanted to continue exploring the area. There’s so much to do over there. I climbed a beautiful mountain up grade VI rock, a beautiful granite peak. I called it Pico’s Pietro, dedicated to Pietro Picco.

Then you returned to civilisation
I have to confess I had a hard time getting used to the hustle and bustle of city life.
All I wanted to do was go back to the mountains! And now I’ve got terrible backache, you have no idea, just from reply to all the emails!

What now?
Now that I'm back, it still needs to sink in what I achieved. With all that bad weather I had almost lost hope. But then, completely unexpectedly, I had a lucky day.