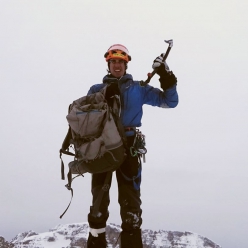 Tomas Franchini on the summit of Spallone dei Massodì, Brenta Dolomites on 19/12/2018 after the first ascent, solo, of Solo il Matto
Photo by Tomas Franchini 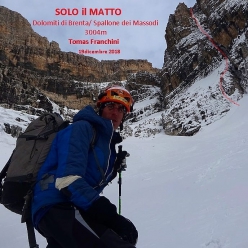 Tomas Franchini below Spallone dei Massodì, Brenta Dolomites where on 19/12/2018 he made the first ascent, on his own, of Solo il Matto
Photo by Tomas Franchini 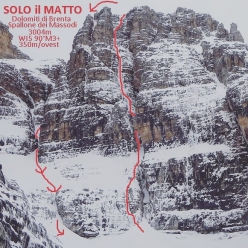 "I simply wanted to climb alone, I like climbing solo, in fact, I love it." These are the words of Tomas Franchini, the mountain guide from Madonna di Campiglio who, whenever given the chance, grasps the opportunity to take to the mountains on his own. His first solo ascent up the virgin west face of Mount Edgar (6618m) in China last year is a case in point, but obviously he’s also carried out numerous solitary raids in his backyard mountains, too. His most recent is dated Wednesday 19 December, when he forged Solo il Matto, a new route up Spallone dei Massodì in the Brenta Dolomites.

"It's a good year, many lines have come into condition and my idea was to climb a line on my own up Cima Tosa" Tomas told planetmountain.com, adding "In the past I’ve done many climbs like this throughout the Brenta and the other day the call was simply too strong…"

Tomas made his way up to the Brentei hut on 18 December, but at the winter bivouac he was surprised to discover that none of his food rations were in his rucksack. As a result of this "joke" he didn’t feel up to dealing with the challenging line on Cima Tosa, so the next morning he opted for Spallone dei Massodi. "I wanted to try and make do with only the two tea bags that were in the bivouac, a fistful of dried fruit and the 3 energy bars that I’d planned on using, so I chose a line that seemed less tiring and was shorter as I hadn’t eaten properly. Spallone is a beautiful rock face, completely untouched, in a wild corner of the Brenta. And the climb finishes at the top of Spallone, where the Bocchette Alte via ferrata pass by in summer. Stunning."

The route is called Solo il Matto, Only the madman, and as to the question about how he climbed the 350m line Tomas replied "I had a rope with me, because I thought I’d abseil back down the route, but in the end I descended down the gully on the other side." Yes, but what about the style? "Totally free. I was mad for it."

06.11.2017
First-class Italian mountaineering in China: the Mount Edgar report
After the initial fragmentary news, François Cazzanelli now reports about the expedition to Mount Edgar (6618 m) in the Nanmengou Valley in Sichuan, China which included Francesco Ratti, Emrik Favre, Tomas Franchini, Matteo Faletti and Fabrizio Dellai. The Italian alpinists succeeded in establishing numerous routes including the first ascent of the West Face of Mount Edgar (Franchini, solo), the first ascent of the NW Face and a repeat of the original route first ascended in 2003 by a Korean expedition.