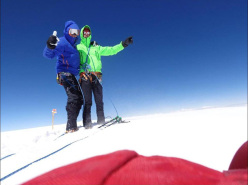 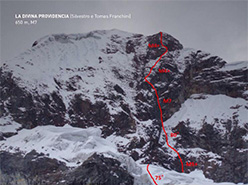 On 2 June 2015 Tomas Franchini and Silvestro Franchini made the first ascent of La Divina Providencia, a new 650m mixed route with difficulties up to M7 on the West Face of Nevado Churup (5495m), Cordillera Blanca, Peru.

An intricate mixed route up the West Face of Nevado Churup in the Peruvian Andes. This is what the two Italian mountain guides Tomas Franchini and his brother Silvestro Franchini returned home with after having spent a few weeks in late May and early June climbing in the Cordillera Blanca massif close to the city of Huaraz.

The original plan of the two alpinists from Madonna di Campiglio had been to enter the Cordillera Blanca for 15 - 20 days and attempt some hidden peak, however during the initial trek Tomas was bitten by a stray dog. A rabies vaccine plus a booster at hospital every seven days was required, hence the need to find an objective closer to civilisation.

After having put up base camp at 4550m, on 2 June the two climbed "a beautiful mixed route" in 9 hours up the West Face of Nevado Churup. La Divina Providencia tackles good rock at the start and poor rock higher up, past M7 climbing. According to the duo, these difficulties are "not so common for the Cordillera Blanca." At the top of the rocky ridge, at 5480m and extremely close to the true summit, they then rapidly descended down the normal route.

Apart from this success, the two repeated the multi-pitch 7c rock climb Los Checos Bandidos, on the famous Esfinge mountain (5330m), and also attempted Nevado Chopichalqui (6354m) but were forced to turn back at 6000m due to an avalanche prone slope. Furthermore, with time running out fast before their return to Italy, they made a fast, three-day ascent of Nevado Huascaran Sur, at 6738m the highest mountain in Peru.

For details about the climbs check out the interview by their sponsors Zamberlan published today on www.expo.planetmountain.com