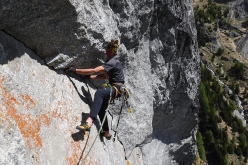 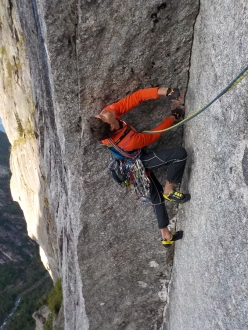 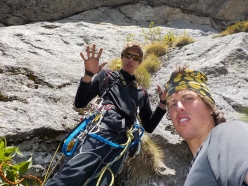 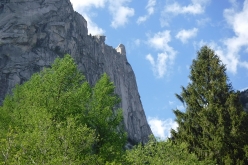 On 22/05/2017 Silvestro Franchini and Tomas Franchini repeated King of the Bongo, the route first climbed in 2014 by the Ragni di Lecco climbers Paolo Marazzi, Matteo de Zaiacomo and Luca Schiera.

On Monday, May 22 we repeated King of the Bongo, we wanted to try the route established in 2014 by the Ragni di Lecco. When I first read the report on planetmountain.com it was a climb that attracted my attention, in particular because of the gear they used during the first ascent and the fact that the descent isn’t via abseil down the route. These are two factors that increase the commitment level and, at least for us, make the overall experience much more interesting.

On Sunday afternoon we walked up to the base of the route and stashed our gear before descending back into the valley where we ate and slept. On Monday we started climbing at the break of dawn; swinging leads we both to alternate shots we both managed to onsight the perfect 7b+ corner and 7c slab.

Unfortunately the eighth pitch was wet and we climbed it with the use of aid. The 7c+ was too tough for us to onsight, having only a few of the right micro-friends that are needed to protect the pitch. We wanted to climb the route in a day so we didn’t have enough time to try and free all the pitches.

Even the final pitches can’t be taken for granted and we came across, as Paolo Marazzi had stated, some "hard grass pitches". At 5.30 pm we stood on the top, 3 hours later we were safely down at Osteria Catto Rosso having descended down from Precipizio degli Asteroidi. I hadn’t climbed in Val di Mello for a long, long time and this latest ascent was very beautiful indeed.