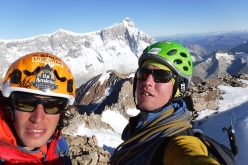 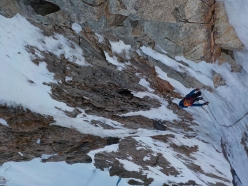 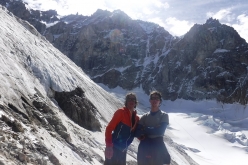 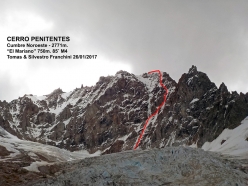 Climbing in Patagonia: on 26/01/2017 Tomas Franchini and his brother Silvestro Franchini made a quick, alpine style first ascent up Cerro Penitentes. The new route is called ‘El Mariano’ (750m, 85° M4).

They set off in search of adventure, into a valley they new little about, simply following a friend’s advice and their instinct. As a result of the bad weather that grounded most climbing activity in Patagonia in January, Tomas Franchini and his brother Silvestro Franchini hopped onto a jeep for two days and made the 500km journey from El Chalten to El Rincón, the southern entrance to the Cerro San Lorenzo provincial reserve in the Perito Moreno National Park. From there, together with park ranger Mariano Ignacio Spisso they’d met thanks to Cesare Fava, son of famous Italian alpinist Cesarino Fava, they "warmed-up" by making a quick raid up the hiterhto unclimbed West Face of Cerro Colorado. After establishing La Ruta del Chinchillone (350m, UIAA VI-) the trio set off with practically no information whatsoever to attempt the virgin SE Face of Cerro Penitentes and reach the unclimbed 2771m high NE summit. The highest point of this enormous, 2801m high mountain was first reached by Patagonian experts Gino Buscaini and his wife Silvia Metzeltin on 22 January 1985 via the North glacier.

"We really hadn’t planned on climbing in the San Lorenzo group" Silvestro told planetmountain.com "we had originally intended on climbing some rock in the Cerro Torre or Fitz Roy areas, but this wasn’t the best of summers and the weather windows were extremely short. And, you know how it is, we get itchy feet really quickly. So we made our way up through valle San Lorenzo with Spisso, from the North via and approach which even he new nothing about, a day following our instinct. We didn’t even have a weather forecast. But we got really lucky, a face sprung into view which we simply couldn’t climb. It’s not every day that you stumble across a mountain like this one!"

Between them the trio had just one tent, one sleeping bag, provisions for three days, four ice screws and a small selection of nuts, camming devices and rock pegs. Seeing how steep the face was, Spisso decided to wait at the camp while the two attempted the SE Face. The brothers bivied on the glacial moraine, then they started climbing at 2:30 am on 26 January in order to make the most of the cold. "The wall was completely silent" Silvestro recounted "we needed to avoid the rockfall and quickly climbed up the righthand side of the face, past a long goulotte with waterfall ice, then past mixed terrain and snow ramps. The sun hit the face at 6, and shortly after 8 we reached the NE summit."

Reaching these 2771m turned out to be by far the easiest part of the entire climb as the descent proved arduous and not without risks. A first attempt at descending the ridge on the other side of the mountain failed due to high winds and poor rock, and the two were forced to make complicated rappels down the 750m face they’d just climbed. "There was no chance of making Abalakov abseil belays and we had to abandon all our gear at the belays, while rock continued to fall all around us." The two finally made it to their tents at 17:00

The new route is called El Mariano (750m, 85° M4) and was "completely unexpected gift. An incredible second option" concluded Silvestro "we experienced a bit of the wild side of Patagonia, how it once used to be."

The Franchini have been climbing in Patagonia since 2012 and Tomas has established a series of new routes in the area. In 2013 with Francesco Salvaterra he made the first ascent of the difficult and dangerous Ruleta Trentina (650m M5 WI5) up the South Face of Cerro Rincón, while in 2014 with Salvaterra and Nicola Binelli he forged a new route up the West Face of Domo Blanco. In South America’s Peru the Franchini brothers climbed a new route up the West face of Nevado Churup (5495m) in 2015, while their new route up the virgin East Pillar of Kishtwar Shivling in the Indian Himalaya climbed with Nicola Binelli and Luca Cornella dates back to June 2016.

The brothers wish to extend their gratitude to Mariano Spisso, as well as Natalia and Federico Echeverria from the Ahoniken restaurant at El Chalten for their hospitality.

19.12.2014
Cerro Torre, Italian climbing action in Patagonia
Currently there are numerous Italian teams climbing in Patagonia, in particular in the Chalten massif, where Cerro Torre was climbed via the Ragni route by Marcello Cominetti, Massimo Lucco, Francesco Salvaterra, Majori Marco, Marco Farina and François Cazzanelli. The route's first ascent this season was made in September by Ermanno Salvaterra, Thomas Franchini and Nicola Binelli.