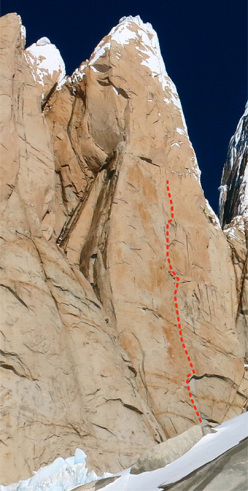 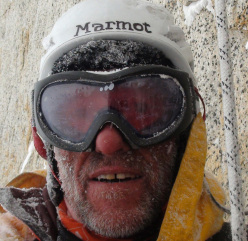 Ermanno Salvaterra and the Torre Egger attempt in Patagonia

"11 days on the face. Just over two days of sun, if this is the best way to describe them. The weather was always terrible. We were totally fed up. So, heavy-heartedly, we decided to give up..." This is Ermanno Salvaterra's extreme synthesis of his latest Patagonian adventure. The face he mentions is Torre Egger's western wall. While the linehe attempted, together with Tomas Franchini, Paolo Grisa and Francesco Salvaterra, rises directly up the centre of the face. Yes, exactly that magnificent line attempted in 1996 by Italy's Lorenzo Nadali, Pietro Dal Prá and Andrea Sarchi, conjured up even earlier still by Manlio Motto, Paolo Cavagnetto and Co. Back in 1996 the trio were forced to abandon their attempt after about 100m. What remained though was the project, that dream of unlocking the key to the massive West Face, one of the last great unsolved problems in Patagonia. As many will recall, last March Matteo Della Bordella and Luca Schiera established Notti Magiche up the West Face and, in doing so, concluded a great, three-year journey which had also included Matteo Bernasconi. But the line straight through the heart of the face remained a prime challenge. Also because it's a complex undertaking, even the logistics are difficult since all the gear has to be shouldered to the base of the mountain. Enter Ermanno, Paolo, Tomas and Francescom who decided to try their luck this November. During those 11 days of battle they climbed high, extremely high, circa 2/3 of the way up the face. A superb effort. So much so that they all plan on returning next year... But that's not all: after the (by no means easy) descent Tomas Franchini and Francesco Salvaterra headed straight to Cerro Rincón (2460m circa) where they climbed a new 650m route up its South Face, past difficulties of M5 WI5 via an obvious corner below a looming serac. Ruleta Trentino is the name of the new route and if anyone is wondering where the name came from, it's worth noting that on his pataclimb.com, Rolando Garibotti describes the route as "a much discussed but frightening line." What remains to be said is that afterwards, evidently still hungry for more, Franchini climbed the Exocet Route on Cerro Standhardt with an Argentine alpinist while Francesco Salvaterra climbed a route up Aguille Mermoz. The (unstoppable) two then attempted Supercanaleta on Fitz Roy but unfortunately Tomas broke his foot in a trivial climbing accident. And it is from here that Salvaterra begins his report about his (nth) Patagonian adventure.

How did it go? I'd say fairly well, apart from the last few days after returning to El Chalten: Tomas and Francesco still wanted to climb so much that Tomas set off for Cerro Standhardt's Exocet route with an Argentine alpinist and Francesco climbed a route up Aguille Mermoz. And then, still restless and ever-keen, they headed off for Supercanaleta on Fitz Roy. They quickly sped up over a thousand metres but then on the first rock pitch a sliver of rock broke off from beneath Tomas' ice axe. Oh oh! He heard a bad noise... Francesco reckoned it wasn't too bad but Tomas had heard the sound of bones breaking all too well. Retreat! A long abseil descent was followed by the long walk out to Piedra del Fraile. They then reached El Chalten and got the bad news: a broken ankle. We returned last night and Tomas stopped off at the hospital in Brescia. As I write he's in hospital. I spoke to him a few minutes ago and he told me that maybe he'll be operated on tomorrow. Good luck Tomas... we're all wishing you a speedy recovery, your ski team is already poised and waiting...

We set off on 14 October and the next evening we reached El Chalten. After a day of preparations and various purchases we reached Piedra del Fraile, the last patch of green. We got there before 12am and not even an hour later we were already hauling our first load towards the Piergiorgio glacier. During the ensuing days we managed to transport all our gear to Passo Marconi on the Hielo Continental glacier. Laden with gear, these trips were both tiring and satisfying. We then put everything onto our sleds. Simple sledges, but super-slippery. The distance we needed to cover wasn't short but after just a few hours, with skis and bobsleds in tow, we reached Circulo de los Altares. I already knew this place but it always makes me incredibly excited. Even the others were fascinated by the place. We were greeted by an unpleasant surprise though as we reached the "Red Thread": this year there was very little snow and when we began to dig our snow cave we immediately hit on some ice. We dug elsewhere a couple of times until we somehow managed to build our "white house." We spent a day sorting things out, preparing for the climb and in the afternoon we walked to the face to check the way up through the glacier. And then we set off... More gear was transported, then we began to ascend and haul everything above the pedestal, where the face steepens and becomes vertical. And then we finally began climbing in earnest. Following in the footsteps of Sarchi, Nadali and Dal Prà. I thought about them and that year. And about Andrea, who wanted to join us this year but then, in all honestly, told me he didn't feel up to all that lugging. Tomas and Francesco were tough as nails. Hauling the heavy bags and climbing. They never complained. One pitch after the next, one haulbag after the other, one gust of wind followed by another, even stronger. One snowfall followed the next. Seracs fell from above, the glacier was criss-crossed by crevasses, there was continuous rockfall. A hard pitch led to an even tougher one, tiring, at times frightening. The wind constantly blew spindrift up into our faces. Nights were spent in our portaledge. Then we moved, 200m higher. Another pitch. Loads of cursing while our fingers froze. Soaked sleeping bags. If only the weather had been good. More hauling. 11 days on the face. Just over two days of sun, if this is the best way to describe them. The weather was always terrible. We were totally fed up. So, heavy-heartedly, we decided to give up... But we still had to return to our highpoint to get our gear, some ropes were needed for the descent. Another day was spent battling against the wind, being slammed all over the place. We'd descend tomorrow. The retreat the following day wasn't exactly easy. We still had loads of gear and reached the ground just before dark. We walked through the glacier guided by the light of our headtorches. New crevasses forced us to change route. There was loads of fresh snow. How much... we just couldn't work it out. And then, just before midnight, we reached NOAA, our guardian - friend. At about 3 we finally snuggled into our sleeping bags. Wet... but at least we were at home.

Ahh, who is NOAA you may ask? She was out little snow woman. Built at the tunnel entrance to show us where to shovel and enter. She was great... and also fun to be with...

The next day was spent discussing projects. Opposite us there was a face that I remembered well. A fascinating yet terrible mountain, with its summit serac directly above the beautiful frozen corner. OK, if the weather wasn't too bad then tomorrow would be the day. I told Tomas and Francesco that I wouldn't go with them though. I wanted to rest if we then planned on trying Cerro Torre's West Face. The next morning, before 6am, they were up and on the first pitch. I wanted to give them a ring and tell them to wait for me... I'd come too! But the phone didn't work and they continued on up. I watched their progress all day and set off in the afternoon to meet them on the glacier. Fantastic! What a great climb! I was thrilled when I finally hugged them. Shortly after returning to our snowhole their line was blasted by falling snow and ice three times. How lucky they'd been... The called the route "Ruleta Trentino "... an appropriate name. The next day we said goodbye to NOAA and, guided by the wind, headed back down to where green abounds.