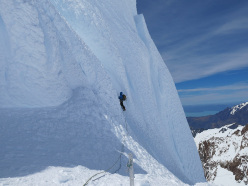 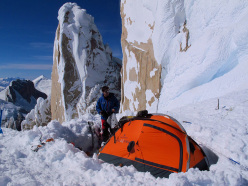 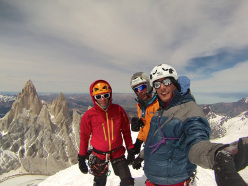 Currently there are numerous Italian teams climbing in Patagonia, in particular in the Chalten massif, where Cerro Torre was climbed via the Ragni route by Marcello Cominetti, Massimo Lucco, Francesco Salvaterra, Majori Marco, Marco Farina and François Cazzanelli. The route's first ascent this season was made in September by Ermanno Salvaterra, Thomas Franchini and Nicola Binelli.

On Tuesday the Italian alpinists Marcello Cominetti, Massimo Lucco and Francesco Salvaterra returned to El Chalten after having summited Cerro Torre on Sunday 14 December via the Ragni di Lecco route. They spent six days in the mountain and the experience was both unforgettable and difficult to put into words.

The Ragni route was first climbed in January 1974 by the team of climebrs from Lecco up the west face of the mountain and is a circa 600m ice and mixed climb. Until only a few years ago relatively few climbers ventured up the route, and in recent years due to the removal of the bolts on the Maestri route it has in effect transformed into the "normal" outing up Cerro Torre and can be considered a difficult classic, certainly one of the most beautiful and sought after ice climbs in the world. One must realise that simply reaching the base of the mountain and returning home is arduous as it crosses kilometers of decidedly "wild" terrain. The climb required two days but the entire round-trip, from El Chalten and back to civilization, took six. Last Thursday the team walked for six hours to reach the Niponino camp in the Torre valley, then began the ascent up to Colle Standhardt, a col that leads to the Los Altares cirque and the East Face of the mountain.

On day three they began to climb the Torre, setting off at 4:00 am to reach Colle della Speranza (the name was given by those who first attempted the route, great Walter Bonatti and Carlo Mauri). From here they continued on to Elmo, the icy shoulder at circa half-height. Seeing that they were the first to “open” the route up to this point after a long period of bad weather the three were forced to "dig" a tunnel through the incredible snow mushroom that characterises this mountain. After the afternoon's beautiful clear skies the trio made a comfortable tent bivy, in a setting which seemed surreal to say the least. More often than not this kind of climbing is associated with pain and hardship, frozen feet, hunger, fatigue, and the infamous "battle against the Alps." Fortunately this isn't always the case and despite the decidely hostile location the three enjoyed a relaxing, comfortable night akin to those at the seaside.

Sunday, December 14, was summit day and they were joined by other climbers who had set off from below Colle della Speranza, including Marco Majori, Marco Farina and François Cazzanelli, three members of the Italian army and friends with whom Marcello and Francesco had climbed Supercanaleta on Fitz Roy the previous year. After having breached the mixed section, the infamous headwall and a vertical sheet of ice, the trio continued up past three snow mushrooms, the last of which was the "crux" of the climb. These incredible snow formations are quite simply unique, formed by the raging Pacific ocean storms clashing against the '"Scream of Stone" to create overhanging snow formations as big as buildings, often extremely complex and psychologically demanding. They reached the summit at about two and after the usual photos they began the long descent to Filo Rosso. The next they the hiked for eleven hours and covered 25km to reach the comfort of Rifugio Fraile, in the Rio Electrico valley.

For all three climbers this was a dream come true. Lucco is an excellent alpinist with a long list of stunning climbs, a long-time customer of Cominetti who has always dreamt of climbing this mountain and even now is finding it hard to believe that he's actually succeeded. Cominetti is one of the most experienced Patagonia mountain guides in the world, although he jokes about it he was the first Italian Mountain Guide and the third in the world to climb this mountain with a customer, while in 1992 he became the first mountain guide in the world to climb Fitz Roy for work. Salvaterra is a Aspiring Mountain Guide from Trentino, he too is deeply in love with Patagonia and last year he attempted the Ragni route with a group of Slovenian alpinists but was forced to turn back shortly below the summit. He is happy now to have reached the top and started his guiding experience by learning the game from a good friend during this unforgettable adventure.

Here's a brief summary of other Italian Patagonian ascents this season: in September the team Trentino guides comprised of tireless Ermanno Salvaterra, Thomas Franchini, Nicola Binelli and Francesco Salvaterra attempted, for the second season in a row, to forge a big wall route up the West Face of Torre Egger but abandoned the ascent due to the danger of falling ice. As a great fallback Tomas, Nicola and Francesco made the first ascent of the 400m pillar with difficulties M6+/6b+ on the west face of the Domo Blanco which they called Pilastro dei Rampegaroi in honor of the revived val Rendena youth mountaineering club. Ermanno, Nicola and Tomas also climbed the Ragni route to the summit of Cerro Torre, making the prestigious first ascent of the season.

Nicola and Tomas remained alone since Emanno departed and then went on to climb Aguja dell'S and Saint Exupery. Subsequently Tomas and Silvestro Franchini, as a result of the constant bad weather, had to make do with climbing Mocho and Aguja de la S. Gianni Canale with Aldo Mazzotti started an important project by attempting a new route up Fitz Roy's Goretta Pillar, but poor conditions have forced them to abandon their attempt for the moment. The Aosta military sports group comprised of Marco Majori, Marco Farina e François Cazzanelli has also climbed climbed the Aguja de la S and Cerro Torre via the Ragni route, while Enrico Bonino and Olivier Colaye climbed Aguja Poincenot.