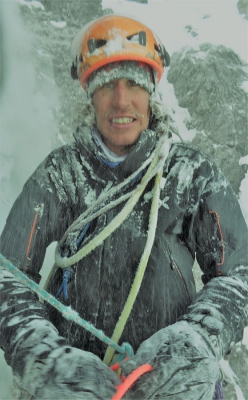 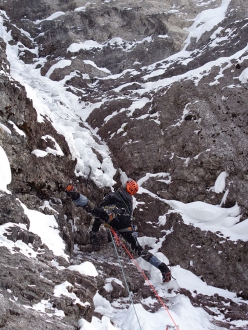 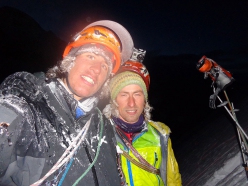 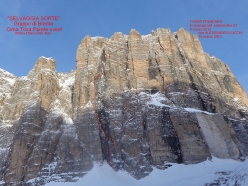 Tomas Franchini recalls the first ascent of Selvaggia Sorte up Cima Tosa, 3133 m, in the Brenta Dolomites. After a first solo attempt, the mixed climb was established by Franchini and Alessandro Lucchi in 2013

Just the other day we reported about the second ascent of Selvaggia Sorte, carried out by Germany’s Ines Papert and Slovenia’s Luka Lindič who chose the first day of the new year to ascend, with some variations, this 500-meter route up the west face of Cima Tosa in the Brenta Dolomites. The line was forged by Tomas Franchini and Alessandro Lucchi who on 12 March 2013 climbed to the end of the difficulties and retreated instead of continuing on to the summit due to the onset of darkness. Just a few days earlier Franchini had tried to establish the route solo, but turned around after pitch seven. Intrigued by this wild - or bad - luck, we asked the mountain guide from Madonna di Campiglio for more information about his adventure 5 years ago.

A new winter climb was added to Cima Tosa in 2013; a unique route on a wild and severe face, in an indescribable setting. I’d noticed it from afar but wasn’t absolutely certain that it had formed properly, also because conditions were variable and perhaps it had already all but disappeared… I set off nevertheless, spurned on by the desire to get out into the mountains more than by a real hope that the line was still in condition. If it’s there, good, if not, then it makes no difference is what I said to myself.

I reached the West Face of Cima Tosa and at 8am on 4 March I started up an extremely evident line, about 100 meters to the right of the large pillar and 200 meters to the left of the autumn rockfall. It’s a black line that leads to the beautiful final gully below the characteristic summit plateau of Cima Tosa. I'm alone. It’s difficult, extremely difficult to find a partner, but I also enjoy being completely on my own in the midst of all these mountains, dealing with this face which doesn’t seem easy at all. I self-belay all the pitches and proceed slowly, also because I don’t have much gear and so I opt for shorter pitches as I slowly make my way upwards. The weather is fantastic and every now I then I look around and listen to the silence of this magical environment. At 17:30, after being enveloped by an intense red light, I decide to retreat because darkness would surely set in before I reach the top, despite me not being that far off. I stash my gear at the base and return to sleep at the bivy, the next day I descend and as I look at this fantastic line I promise to return soon. I’m angry however for having lost my camera, which means I can’t photograph anything!

I’d love to return and finish the route off on my own but I don’t have much time and climbing solo is a lot slower… so I look for a good parter who can help me finish the line and appreciate the ambient. I’m overjoyed when Alessandro Lucchi agrees to join me; he’s a good mountaineer with plenty of experience and drive! We set off on 12 March. I want Ale to climb the pitches I had established on my own to so that he can savour and judge them; he likes them as much as I did, confirming therefore that the route is rather unique. After 7 pitches we swap leads and I set off up the "new"section; this is immediately challenging, far more than expected, but finally we reach the base of the gully that leads to the exit. This pitch is fantastic, there’s only just enough ice, the rock doesn’t provide any good pro and I painstakingly climb past the first overhang, then the vertical section, a final thin drip and I’m finally at the end of the pitch. Fantastic. Two more steps past unconsolidated snow lead towards the top, but given the weather and time of day we decide not to continue to the summit but, following Alessandro’s wise advice, retreat so as to avoid being sucked in by the fog and darkness.

The descent proves difficult and we’re forced into a whole load of shenanigans, even cutting the rope in order to get down in the dark. We pack our rucksacks and descent into deep dark Val Brenta and return to civilisation! Selvaggia Sorte, wild fate, or bad luck, seems to perfectly suit the climb, the face and the adventure we just experienced.