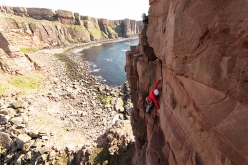 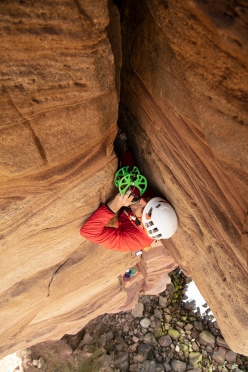 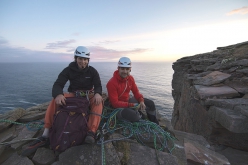 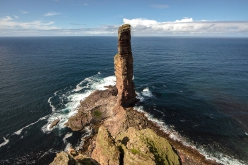 The Old Man of Hoy, Orkney Islands, Scotland. First ascended in 1966 by Chris Bonington, Tom Patey and Rusty Baillie, the 137m high red sandstone tower is one of the tallest stacks in Britain and over time it has come come to symbolise British rock climbing.
Photo by © Alastair Lee / Brit Rock Film Tour 2019

PORTFOLIO / gallery Portfolio: Jesse Dufton and his extraordinary ascent of The Old Man of Hoy in Scotland

Interview with blind British paraclimber Jesse Dufton who the famous trad climbing route The Old Man of Hoy off the Orkney Islands in Scotland. Guided by his climbing partner Molly Thompson, the achievement has been recognised by the Scottish parliament.

The recent ascent of The Old Man of Hoy by blind British paraclimber Jesse Dufton understandably left its mark, so much so that even the Scottish Parliament has congratulated the Englishman and his climbing partner Molly Thompson for their undertaking. As reported, the sea stack is a true symbol of British trad climbing and, guided by Thompson, Dufton managed to climb the entire route onsight, without ever falling or resting. The adventure, however, began hours earlier with the approach which for those who cannot see is anything but easy, and ended in the when the two finally returned to the tent in the early hours of the night.

Jesse, let’s start with your blindness
I have light perception only, I can tell the difference between light and dark in a small region, but that is it. Imagine you are looking down a drinking straw and this has 5 or 6 layers of clingfilm over the end. If I hold my hand in front of my face I can't see it. I lost the ability to read about 10 years ago.

So what was the route like?
The climbing was really great. Pitch 1 was easy climbing up a wide rib bathed in the hot sun. Pitch 2 is a tricky traverse. There are good footholds, but beneath these it is undercut and even though I can't see, I can still tell that there is nothing beneath me as I stepped across with nothing useful in my right hand. Pitch 3 is the crux. You climb a wide crack into a roofed chimney. You crunch up as you traverse out and then it is difficult to get past the roof and into the crack above. I managed to do this reasonably smoothly which I'm really happy about. Pitches 4 and 5 offer easy climbing, but pitch 5 is quite bold. Pitch 6 is amazing, there is a cleft which splits the stack into two and you just follow this to the top. As I climbed the final pitch the sun was setting and I could just about tell that there was an orange light shinning through the cleft.

What about the belays?
When I climb outside I usually build my own belays. I have a 6th sense for where gear might be placed and feel around until I can put in several pieces and build a solid anchor. I don't always use the obvious gear placements, but my anchors are always solid. When I led Brant Direct in Llanberis, North Wales I built a complex 3-piece equalised anchor about 1 foot from the nest of abseil slings that I could have just clipped, had I been able to see it….

The climb was only half the story. Just getting to the base sounds complicated
For me the walk in and out can often be as hard or even harder than the actual climbing. When you can't see, broken ground is a nightmare. Fortunately here the path to get to the headland is very good. However, the little path from the headland to the base of the stack is quite narrow with large drops below you. Molly guides me down these sections, and I can tell from the tone of her voice when we are in a "don't fall here" section. There were a few of these to get to the stack.

What about the descent
I don't find abseils too bad, they are certainly easier than scrambling over broken ground. If they are free-hanging it makes it even easier. The last abseil was free-hanging and as I went down I was hoping that someone at the bottom was watching me and that they would tell me when I was approaching the ground so that I didn't accidentally lower myself straight onto my arse.

What is the thing you’re most proud of Jesse?
I am most proud of the fact that I climbed the route clean. I was confident that I could get to the top but I feared that if the crux was too hard I would have to rest on gear or take a fall. Fortunately I climbed the crux reasonably smoothly and once this was done, I motored up the last 3 pitches to the top.

You said you can’t wait to see the footage…
I can't wait for 2 things. First, for Molly to describe the film which Alastair Lee is making to me. I won't be able to see the pictures but I still want to see how Alastair puts the story together. The film will be shown in the 2019 Brit Rock Film Tour in October. Second, I hope that during my lifetime we will develop the technology to fix my eyes. I realise that this is likely to be more than 10 years away, but there is certainly a chance that in the next 30 years it will be possible. If this happens I can't wait to see all the photos and video and compare them to the mental picture I have imagined for myself.

OLD MAN OF HOY
First ascended in 1966 by Chris Bonington, Tom Patey and Rusty Baillie, the 137m high red sandstone tower is one of the tallest stacks in Britain and over time it has come come to symbolise British rock climbing.