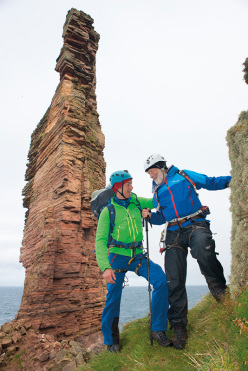 Sir Chris Bonington and Leo Houlding in front of The Old Man of Hoy, Orkney Islands
Photo by Berghaus

The Old Man of Hoy and Sir Chris Bonington

The video of The Old Man of Hoy, Scotland, climbed in August 2014 by Leo Houlding and one of the first ascentionists, the 80-year-old British mountaineer Chris Bonington.

One of the most famous summits in Great Britain isn’t actually a mountain, but a fragile sandstone sea stack that juts out of the freezing waters in the Orkney archipelago off Northern Scotland called The Old Man of Hoy. This “old man” entered the collective imagination of the nation in July 1967 thanks to a three-day live BBC broadcast that followed the climbs of Chris Bonington, Tom Patey, Joe Brown, Ian McNaught-Davis, Pete Crew and Dougal Haston. A black and white transmission watched by over 15 million people glued to their TV sets in what is considered to be the first "reality TV" in the history of the BBC. During those windy three days Brown, McNaught-Davis, Crew and Haston established two new routes, while Bonington and Patey repeated the original route up tower, climbed by them the previous year.

This original route was, as we reported, repeated in 2014 by Chris Bonington once again, this time to celebrate his 80th birthday and also to raise awareness and funds to battle motor neurone disease (MND), in memory of his wife Wendy who died of the condition last year. Bonington repeated his route together with Leo Houlding and this video portrays the extraordinary wild beauty of the Orkney Islands and also the extraordinary fibre of Sir Chris Bonington who, this year in Courmayeur, will quite rightly receive the Piolet d'Or Carrière.