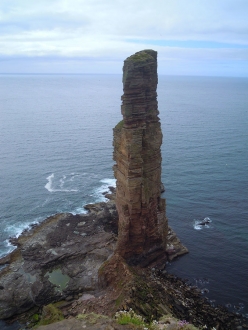 The The Old Man of Hoy, first climbed in 1966 by Chris Bonington, Tom Patey and Rusty Baillie
Photo by A. Fioretti, G. Todesco

Old Man of Hoy climb by eight-year-old raises 30,000 € for Climbers Against Cancer

The Old Man of Hoy in Scotland was climbed recently by eight-year-old Edward Mills. In becoming the youngest person to climb the iconic sea stack he importantly raised nearly €30,000 for Climbers Against Cancer.

One of Great Britain’s most famous rock climbs, the Old Man of Hoy on the Orkney Islands in Northern Scotland, was climbed on 8 June 2018 by eight-year-old local Edward Mills. Mills’ mother has terminal breast cancer and what makes Mills’ ascent noteworthy is not so much the fact that he is officially the youngest person to climb the iconic sea stack, but that he raised nearly €30,000 for the international charity founded by the late John Ellison Climbers Against Cancer.

First ascended in 1966 by Chris Bonington, Tom Patey and Rusty Baillie, the 137m high red sandstone tower is one of the tallest stacks in Britain and over time it has come come to symbolise British rock climbing. In 1967 circa 15 million people spent three days watching one of climbing’s first live broadcasts as Bonington and Patey repeated their climb and Joe Brown, Ian McNaught-Davis, Pete Crew and Dougal Haston established two new climbs.

The original line happens to be the easiest route but at E1 5b, circa French 6a that needs protecting with trad gear, it is no easy outing by any accounts. Mills received training and advice from the likes of Dave MacLeod and winner of the first Lead World Cup in 1989 Simon Nadin, and he was accompanied on the day by Ben West and Cailean Harker.

To find out more check out justgiving.com, thebmc.co.uk, Climbers Against Cancer

What a star young Edward Mills is.. a successful ascent of the Old Man of Hoy along with his 2 coaches @ben.west_ and @caileanharker raising over £30,000.00 in the process. The just giving page is still open for you to make a donation.https://www.justgiving.com/fundraising/edwardandtheoldman Such an amazing achievement. Visit the climbers against cancer web site for details. Www.climbersagainstcancer.org #climbersagainstcancerofficial @mills_a_hoy @nathanmills_01 #benwest #caileanharker . Many thanks to @alexshawphotography for the great photographs . #climbersagainstcancerofficial #climbmoreworkless #fundraising

A post shared by Climbers Against Cancer (@climbersagainstcancerofficial) on Jun 12, 2018 at 7:10am PDT