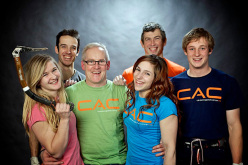 John Ellison with his nurses
Photo by Climbers against Cancer 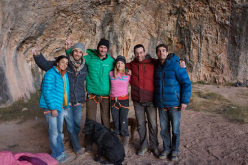 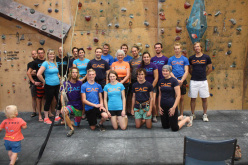 Interview with John Ellison, the man behind Climbers against Cancer, the campaign which aims to raise awareness and gather funds for cancer research.

Perhaps you’ve already noticed those T-shirts, in all the astounding colours of the rainbow, worn by climbers worldwide. We’re talking about the T-shirts Climbers against Cancer, the campaign started by Englishman John Ellison which is spreading like wildfire throughout our vertical community. But behind these beautiful, joyful T-shirts lies a series story: at the end of 2011 John was diagnosed with a serious cancer and, after an understandably difficult start, he decided to react in his own personal way and invest all his energies in creating and promoting the campaign Climbers against Cancer. The initiative has two main aims: raise awareness of this disease and raise funds to be destined to various cancer research institutions. Given what is at stake, we simply had to share this interview, direct, personal and illuminating, in the absolute certitude that once again all climbers will know exactly what to do.

John, you have been diagnosed with cancer. Can you tell us about that day?

The story began back in October 2011, Thursday 6th to be exact. I remember it well. I was in a meeting when I felt a strange pain in my right leg. Nothing unusual there, I agree, but this pain was different, coming from deep within the bone and unlike anything I had come across before. It wasn’t extreme in any way, just unusual. The following morning after a rather unsettled night I awoke to find the pain still persisting and, if anything, growing. Something was definitely wrong so I made my way over to see my doctor. A friend and a keen sportsman, he was the perfect person to see as he knew me well. Following a lengthy examination he too was puzzled and couldn’t point to any reason for this pain. The best option, he decided, was to take some blood samples to get to the bottom of this.
My next contact with him came just 3 days later when on Monday morning he called to explain something wasn’t right, one of the blood counts was extremely high and I would need to go for a biopsy! I could tell in his voice he was worried and the word ʻbiopsyʼ itself had me
thinking.
Even at this early stage I knew things ere serious and it was the first time the thought ‘cancer’ came to mind. Following 3 weeks of very intensive and intrusive examinations I was finally called to a meeting with the urologist for the breakdown of the results. Friday the 28th October, a day that will live with me forever and a very black day to say the least. Just 3 weeks after the first sign of a pain and I was to be told the news I guess we never think we will hear and the words we all dread. Like being hit with a sledgehammer is the only way I can describe the feeling when the nurse said “sorry to tell you this John but the results are not good and you have CANCER”. If that was difficult to absorb then worse was to come! “I am also sorry to have to tell you that it is a very aggressive type and to add to that you also have a secondary cancer.” Wow, even though I had already prepared myself for the worst it still took me by surprise and was quite a shock. Then she hit me with the sledgehammer one more time! “Unfortunately there is no cure.” Amazing, in just 3 weeks I had gone from being extremely healthy, or so I thought, to being told I was in fact DYING!

Cancer is a word many prefer not to mention, but it's important to know as much as possible. Is there anything you learnt about this illness you feel is worth sharing?
CANCER! A very big word, often referred to as the BIG C but still a word that people are afraid to mention, especially in public. This was one of the first things that I noticed after that dark Friday. No one likes to even mention the C word and very few people would hold an open conversation that included the word. From the very first moments following my diagnosis I decided that there was only one way to deal with this situation, and that was to be positive, open and happy! Yes happy! Even the nurse was shocked with my response and was taken aback when I said “now I want you to tell me everything, leaving out nothing. I can only deal with this if you put all the cards on the table.”
To try and explain cancer itself is difficult as there are so many forms and variations. I am no doctor and the ʻnuts and boltsʼ should be left to the specialists. However, being very open and honest about my predicament and answering every question openly definitely helped my family and friends understand the situation more. Whether a child or adult, I have seen a real change in attitude around me and a real desire to discuss that word “cancer”. If we are ever going to defeat this disease we need to talk about it first, bring it into the open and expose it for what it is, little c!

Tell us about the CAC project, how did that come into being?
The World Climbing Championships in Bercy, Paris was where the idea for CAC was born. I sat amongst some very good friends from around the globe, climbers, coaches, officials, route setters. They were all there, from every nation, with differing backgrounds, different cultures, various languages and yet everyone was a friend. Supporting each other regardless of their nationality, cheering loudly as a route was flashed or a boulder was topped. Almost like a huge extended family, we had all come together under one banner and to support the sport we love! Climbing is a special sport. Like no other! It was in this moment I knew we had so much to offer as a group of friends. This is when CAC came to life!

Tell us about the goals.
The goals of Climbers Against Cancer are not only to raise funds to help fight cancer by supporting research but also, just as important, to raise awareness of the disease and highlight the problems that not only the cancer sufferers go through, but also their families and friends.

Enter the T-shirt and its simple message
The idea behind the T-shirt was to design a garment that not only looked smart and was comfortable to wear, but that also carried a very strong message. CAC stands out very well and pushes people to ask the question “why CAC”? Explaining the reasons straight away opens up a conversation that in turn increases overall awareness. A unique twist to the design is the rear logo. I wanted a logo that would be recognisable on its own, without text and by turning the second C around we came up with the perfect result. Perfect in the sense that it resembles my spectacles and so brings a very personal touch to the whole design. I feel that by adding this to the tops it not only will leave a legacy of my own but also represents all the other people out there struggling against cancer or any other ills or adversities.

Where will the funds go to?
Once the scheme is fully functional and we start to raise larger amounts of money the plan is to split the proceeds amongst cancer research facilities across the globe. For example, if we have £100,000 we will distribute this to 5 chosen locations around the world and then the next £100,000 will be split between 5 different facilities in 5 other locations. Again, by doing things this way I believe everyone would feel a connection and benefit, wherever they live.

How much does the T-shirt cost?
I decided to make the costs fair across the world and that price would be the same. So for example the £15 price in the UK equates to approximately €20 in the rest of Europe or $25 in the USA, etc. This price also includes postage and by doing this the postal costs will average out across the world, allowing us to use a minimum of 50% for fundraising, in some cases even more. Just to note, no one at any stage will make any profit out of CAC and actually quite the opposite is the case as I already have people offering their services for free.

How can people buy them?
T-shirts are available online from www.climbersagainstcancer.org, or can be bought once at climbing walls and other venues who decide to stock them and support CAC in this manner.

Did you expect such support from climbers?
I have to admit that although I knew climbers were a special group of people - and I know a lot of climbers around the world - I feel extremely honoured and humbled by the response so far. I immediately felt a lot of strength in all the climbers who offered their support and I feel proud that everyone has reacted in this way. To me this echoes my first feelings back in September in Paris. It goes a long way to show just how orientated climbing is to individuals and their families.

What's been the biggest hurdle so far? And the best moment?
I guess the biggest hurdle was finding the strength to push CAC forward whilst dealing with the stresses and strains that terminal cancer brings to your door. I am determined to keep going as long as I can and to put Climbers Against Cancer in a position that, if the worst scenario comes to fruition, it will carry on going long after I have left the building, or so to speak! As for the best moment, well that is a difficult one as I treat everyone the same and see us all as equals. I have met some fantastic climbers along the way and some huge stars in our sport but I am just as excited when I read a letter of support from a young climber I hardly know or see a climber smiling away as they put their CAC t-shirt on for the first time. Given my predicament it may seem a strange thing to say, but I am truly happy.

John we wish you, and your initiative, all the best in the world
Thanks! I would like to take this opportunity from the bottom of my heart to thank everyone for their love and support.