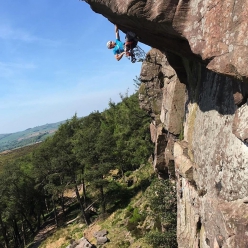 Jesse Dufton, the blind British paraclimber, repeating the famous trad climb The Sloth at The Roaches in England. The ascent has been described by those who know as redefining the word 'impressive'.
Photo by Neil Gresham

Blind British paraclimber Jesse Dufton has repeated the famous trad climb The Sloth at The Roaches in England. The ascent has been described by those who know as redefining the word 'impressive'.

When one of Britain’s strongest and most experienced climbers states that what he’s just witnessed redefines the word "impressive", it’s worth taking stock. The man in question is Neil Gresham, the climber who years ago mastered sport climbing 8c+ and, with Equilibrium, trad E10 (basically the maximum on the British trad climbing scale), while what he watched the other day was Jesse Dufton fighting his way up The Sloth at the Roaches.

First ascended by Don Whillans back in 1954, even by today’s standards this great classic is an intimidating lead for many. Just to give you an idea: when someone repeats the route, the entire crag grinds to a halt and everyone stops to watch. What makes Dufton’s ascent so remarkable is that he is essentially blind. A member of the British paraclimbing team, Dufton was guided through the steep overhang by his fiancé Molly who, using a headset, told him precisely where to place his hands, feet and, in this case, trad gear!

"Simply incomparable to anything else I’ve seen in climbing" was Gresham’s fitting conclusion, while GB Paraclimbing team coach and manager Robin O’Leary has described this as "up there with one of the most impressive ascents on grit!"


TOPO: climbing at The Roaches, UK

03.11.2009
The Roaches, rock climbing in England
For many the atmospheric Roaches is simply the best gritstone crag in England.

27.04.2017
Ronnie Dickson’s inspirational climbing
In April 2015 the American paraclimber Ronnie Dickson managed to send the 7C+ boulder problem Resident Evil at Joe's Valley, USA, nine years after having his lower leg amputated. This is his inspirational story, in a film by Alton Richardson and Jordan Shipman.