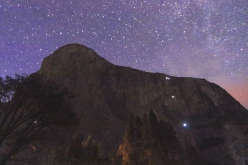 Eleonora Delnevo - the Italian paraclimber paralysed from the waist down after a mountaineering accident in 2015 - has climbed the Zodiac route on El Capitan in Yosemite together with Mauro Gibellini, Diego Pezzoli and Antonio Pozzi.

Heads up to Eleonora "Lola" Delnevo, Mauro Gibellini, Diego Pezzoli and Antonio Pozzi who have repeated Zodiac on El Capitan in Yosemite, USA. Their autum ascent is remarkable and far more than a "normal" repeat of this famous big wall since Delnevo became paraplegic following an ice climbing accident in 2015. In order to repeat the 550m high Zodiac, the Bergamo mountaineer had to perform a never-ending series of pull-ups, using a system similar to the one adopted by her friend Vanessa François on the same route in 2013.

We can only begin to imagine what this ascent represents to Eleonora and her close-knit group of friends. In October 2016 Lola, Diego Pezzoli and Angelo Angelilli had attempted to repeat the climb on the righthand side of El Cap, but the trio were forced to abandon their attempt on pitch five. Now, after three days and two nights on the wall, they successfully reached the summit.

Obviously reaching the lip of El Capitan and negotiating the long descent path were undertakings in their own right, supported in the midst of a huge downpour by the "superb help of the rescue team that gave us a hand halfway down the descent" as Pezzoli told planetmountain. But there’ll be time to find out more about the intricacies of the ascent and descent at a later stage. In the meantime there’s the unbridled joy of the climb and extraordinary top out on El Capitan that Eleonora had dreamt about for years.

17.07.2013
Steve Bate solo climbs Zodiac on El Capitan
In June Steve Bate from New Zeland repeated the Zodiac up El Capitan in Yosemite. What makes his ascent noteworthy is that Bate is affected by Retinitis Pigmentosa.

15.07.2014
Baba Jaga, new aid climb up Pinnacolo di Maslana
The report by Diego Pezzoli about the first ascent of Baba Jaga (V 6a A2+, 180m),a new aid climb up the Maslana pinnacle, above Valbondione, Italy.